Bass! How Low Can You Go? Art Samples Art – Opening In Chelsea 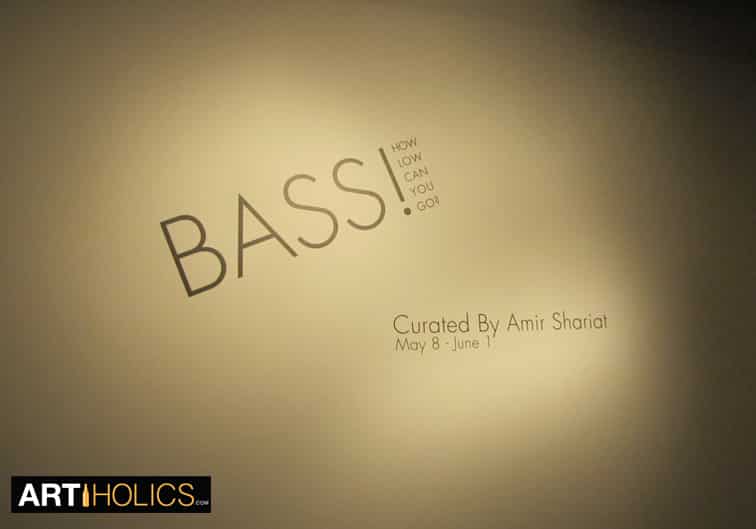 I stumbled into the opening of Bass! How Low Can You Go? at Lelia Heller Gallery on West 25th Street last Wednesday.  The show was named after a rap song, which was named after the lyrics of an earlier rap song.  Curious.  I wonder if Flavor Flav is getting any royalties or kickbacks from the sales in this show? Those giant clock necklaces don’t buy themselves!

“Too black…Too Strong…Too black…Too Strong…” are the opening lyrics of the song this show is based after. What was great about this crowd and this opening is that it’s a nearly 100% chance that nobody in attendance identifies with those lyrics, owns a copy of the Public Enemy Vinyl “Bring The Noise,” or has a clue who Chuck D is. Most likely they will know Flav as nothing but a weird reality TV star. Yeaaaahh Boyyyyee!

This was later remixed by Simon Harris into a piece-of-shit song called “Bass! How low can you go?” which was just composed primarily of samples from the the Public Enemy Song.

I personally first heard the song by playing Tony Hawk Pro Skater 2 (as many white kids from the burbs in the 90s probably did) which featured the Antrax / Public Enemy Version. (Listen to this if you want a 90s flashback).

Chuck D signing Public Enemy Comics at NY Comic Con 2007 first sign of the Hiphopocalypse.
The funny thing is, if the gallery had extended an offer, Chuck D would probably have come to the opening.  I remember back in 2007 at the New York Comic Con when I was a guest in Artist Alley,  my mind was blown when I was walking the event and  saw Chuck D signing “Public Enemy” comic books.

In the same way that Simon Harris sampled from Public Enemy, a lot of rap takes samples of what came before and remixes it into new work. This show is very much in the vein of younger artists sampling from artists that came before them.

“When Chuck D raps ‘He can cut a record from side to side,’ he is cannily referring to Terminator X, the legendary Public Enemy DJ.  Erica Baum and Gibb Slife allude to the voyeurism of Warhol, while the former revels in the genius of Michelangelo. Antonioni’s masterpiece Blow Up and the latter can’t stop our innate thirst for news and gossip.  Sheree sculptures then take Rodin to the next level or should I say the Tower of Babel? Anthony, a sesasoned record collector, meets Bonalumi head on, takes his hand and shows him the way to America.  Rachel meets Enrico and Enrico meets Rachel: it’s not the economy stupid, it’s the fabric of society!  Raphael D rounds them all up and shouts “Danke” to Agostino, Andy, Dadamaino, Enrico, Lucio, and Paolo. Fontana’s 1946 White Manifesto sums up the exhibition: ‘Matter, color, and sound in motion are the phenomena whose simultaneous development makes up the new art.'” -Amir Shariat

Bass! How Low Can You Go? is currently on view Lelia Heller Gallery until June 1
The gallery is located on the corner of West 25th Street and 11th Avenue