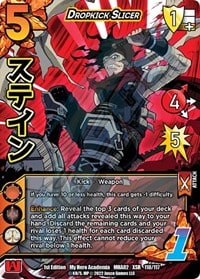 The Dropkick Slicer XR is a part of the My Hero Academia Crimson Rampage set!

The My Hero Academia Collectible Card game has been an enormous hit. The fans of the show have embraced the new game with open arms. The already existing TCG community has also enjoyed the game. All in all, it is a game that will stick around as the anime shows no signs of stopping.

The characters in My Hero Academia are its biggest strengths; the excellent costume design that can hero has just made the anime worth watching. In fact, it is one such anime in which there are more fans of the side characters than the protagonist himself! One such character for the show was Stain, a renowned anti-hero whose philosophy inspired a lot of villains.

The card that features this incredible character is the Dropkick Slicer XR; the card shows the villain in a dropkick pose, hence the name. The card has become one of the best sellers in the new expansion, Crimson Rampage, so in this article, we’ll be shedding some light on this card and find out why it is worth so much! Stain or Chizome Akugora is one of the most deadly villains in the anime; I won’t even call him a villain per see as he wasn’t inspired by the motive of harming people. He was called the hero killer for a reason; he kills a lot of Pro Heroes as he thinks Heroes are the worst in society.

According to his thinking, Heroes are as bad as villains as they do it for the fame and the money, this might not be truer, but Stain definitely has inspired a lot of villains and a lot of ordinary people too. 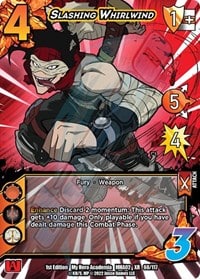 Stain probably has one of the most badass quirks in the anime, he uses a blade to cut through his opponents, and when he tastes their blood, the opponent becomes wholly paralyzed! This is the reason he was able to kill so many Pros.

Stain is a favorite villain and hence has a lot of cards in this Crimson Rampage expansion!

The card’s illustration is one of the reasons for its high value in the reseller community. The card features stain in a badass pose where he is barging from the top with a dropkick, and the card’s name is very fitting.

As for writing this article, the card is being sold for around $120 on multiple reseller websites. It might go up even higher than what it is right now for a reason. The card features one of the best villains we’ve seen in the anime, and this is one of the first cards that feature him; in the long run, collectors would love to have this one in their possession.