The My Hero Academia debuted just this year and has managed to carve a significant space for itself in the TCG landscape. Much different shounen anime try to create card games around their characters. But, the My Hero Academia Collectible Card by Jasco Games looks like the most convincing and popular one so far.

This is because of the characters that feature in the anime; some of these characters turn out to be more popular than the protagonist himself, which speaks volumes about the anime’s popularity. Because of this, we got a lot of great cards from the base UniVersus Set and the Crimson Rampage expansion.

Recently in promotional events, cards were given out; one such card is the Izuku Midoriya regional promo, which is being sold for a high price right now, so we decided to do a blog post dedicated to this card!

All Might was his saving grace, and the show MHA revolves around his story as he tries to tame the legendary powers he has been given! 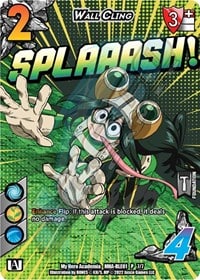 To promote the brand new sets released for the MHA Collectible Card Game, or CCG for short, new promo cards were given out at the Regional License Exam events! The cards feature various popular characters. All their card are given above; you can also know in more detail about the cards by clicking on them!

The Izuku Midoriya regional promo is probably my favorite promotional card from the bunch; it features the protagonist himself. The card does a great job at incorporating the theme colors of Deku.

The background especially is fantastic and looks great with Deku in front. The card seems almost comic book-like, and that’s intentional; most of these promo cards look like they were drawn in the comic book style. The anime also takes a lot of inspiration from western comic book styles!

As of writing this blog post, the Izuku Midoriya regional promo is being sold for $80; the might differ due to the quality of the card you are buying.

As it is an Izuku Midoriya card, it will stay relevant longer than other cards. Plus, it is a card that was given out at one of the first promo events for the card game, so it might hold its value or even increase in the future!