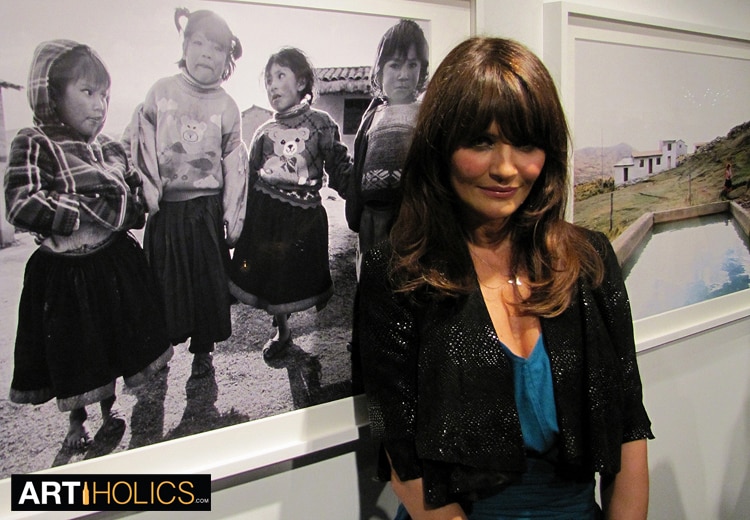 Throughout history there has always been a symbiotic relationship between the artist and their model.  A living muse is a thing of beauty which only remains in tact for a few short years, and it’s the artists ability recognize this beauty and to capture it in a still frame, or painting on canvas.  After all, what would the Mona Lisa be without a model but a drab greenish landscape with some scrubby bushes and a twisty dirt trail?

Thus said, it is always fascinating when a model transcends being a muse, takes on the artist mantle, and starts capturing muses themselves.

I was invited to attend a VIP opening of supermodel turned photographer Helena Christensen‘s photography exhibit in the West Village this past Thursday for a show titled VISUAL JOURNAL, PERU.

I attended the coffee and croissant preview at Bleeker Street Arts Club  the morning of big opening. This was a nice way to see the work in natural daylight, and without the room being jam-packed, as galleries tend to be during openings.

I was able to step back and see the compositions as a whole.  Helena not only photographed the work, but curated the hanging of it.

The new work is part of her role as the Global Explorer for the Luxury Collection Hotels & Resorts.  They gave her a Leica Camera and sent her and her mother (who is Peruvian) to Peru, let them stay in three of their various luxury resorts around the country, and just set her off to take pictures with no agenda.

Unlike other corporately sponsored gallery events, there was no branding to be seen.  I wish more corporate patrons would  fund artist’s work in such a way,  underwriting artists to allow them explore and create without donning the Nascar jacket of ownership.

Mixed within the photos were pieces of actual handmade Peruvian clothing.  These outfits are not for sale, as they are part of Helena’s private wardrobe which she actually wears.  Tourists will often offer to buy clothes right off of Peruvian’s backs but they are reluctant to sell them because they are hand made, an the bright colors are hard to come by.

I love this photo of the Peruvian children.  Other than the boy on the right’s sneakers, the clothes seem to all be one of a kind custom outfits.  Its great to see that Walmart isn’t everywhere on earth yet.

Some cultures still have some authenticity in tact.

Unlike the casual tourist with the requisite Machu Picchu shot she ventured to the further off places, capturing the people, animals, and landscapes in all their unfiltered and candid beauty.  You can view the entire show’s gallery online.  The prints are available to bid on to purchase via Gavel&Grand Here>>

The opening itself was as you could imagine, packed.  Some of the A-List beautiful people, and some of the most talented people from world of music, acting, and fashion.  Both male and female supermodels galore.

There were also a slew of  photographers with giant camera rigs trying not to get any of the other photographers in their shots. When standing next to the world’s top models and supermodels, photographers look like unwashed neanderthals.  If you ever want to feel like an ogre, stand next to these people.

Did I mention there were a few supermodels at this event?

Hugo Boss model Alex Lundqvist.  I might as well go back under that bridge and paint, grumble, grumble…

Supermodel and photographer in her own right Helena Christensen, whose work we were all here to toast.  I asked her if she would pose in front of the photo with the children.  She led me across the room and happily obliged.

Breaking away to the acting world Norman Reedus, aka Daryl Dixon on my favorite basic cable TV show The Walking Dead.  Norman was married to Helena from 1998-2003 and have a son together.  He’s also a painter, sculptor, and photographer.

If you weren’t alive in the early 90s, you missed some very special TV moments, especially when it comes to photographers and filmmakers throwing their hand into the music video realm.

I was a teenager in the 90s, so MTV and the music video stars of the 90s are right in my adolescent sweet spot.  In the days of Columbia House Music Club, and cassette tapes.  Songs and videos of those peak teen years help define a moment in your development, and stick with you.

When fashion photographer Herb Ritts directed and shot the video for Chris Isaak’s “Wicked Game” with Issak and a topless Helena Christensen, I was sold.  He upped the game for what it means to be sexy in a music video.  It elevated the genre.

Another video at the same time that captured adolescent attention was the video for Aerosmith’s song Crazy.

This video starred a young Alicia Silverstone, and Liv Tyler.  We follow them on a Ferris Bueller esque school breakout & road trip which rather than going to a cubs game, an art museum, and singing danke schoen  in a parade, these two high school truants go shoplifting, pole dancing, skinny dipping, and have implied teen lesbian sex in a hotel.  What isn’t there to love about this video?

Just when this party couldn’t get any better…

I asked Liv if I could take her picture.  I told her I’ve met her sister, model and photographer Mia Tyler a few times and have written about her photography openings.  Liv seemed happy by that.  I have a hunch I am probably one of the few actual artist / art writers at this event not associated with a PR firm, so having someone who has actually written about other photography or art events in attendance was probably novel.

So, the icing on the cake of the 90s music video trifecta …

R.E.M. and Aerosmith were gods to me.  So meeting R.E.M. front man  Michael Stipe was pretty mind blowing.

I told him “You are my college years in one person.”  More like my high school years, but considering R.E.M. was known as a college band, I wanted him to connect.  He instantly stopped, put on his glasses and posed for me.  Total class.

In red is Georgina Chapman, fashion designer, actress, and wife of Harvey Weinstein.

Actor, producer and  designer,  Waris Ahluwali was last year’s Global Explorer, whom you might remember from the Wes Anderson films.

Daniel Benedict, brand ambassador for The Leading Hotels of the World.

VISUAL JOURNAL, PERU will be on display from January 31 through February 17, 2014 at the Bleeker Street Arts Club 305 Bleecker St.,NYC 10014 – Open Tuesday – Saturday 11 am – 7 pm.  A portion of the proceeds to benefit Oxfam.  The prints are available to bid on to purchase via Gavel&Grand Here>>