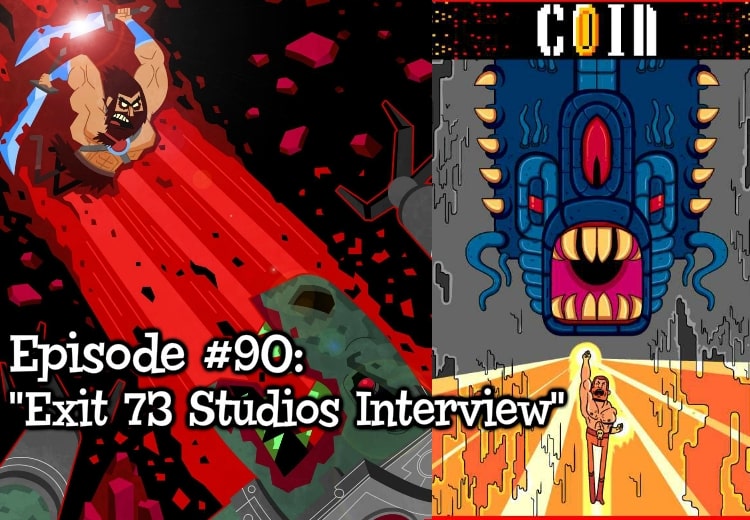 This week we have an interview with Chris Burns and Bob Fox of Exit 73 Studios, the creators of the hit animated short COIN and their newest short BOLTRON NINJA MASSACRE. We talk to them about their history, methods, goals, and video games (because of course)! We cover how COIN came to be, what prompted the creation of BOLTRON NINJA MASSACRE, how they work together to actually make those awesome shorts, the two-letter onomatopoeia that really tick Chris off and a TON more! We hope you enjoy this episode and are inspired by their tight teamwork and vision. Chris and Bob were great to talk to and if you stay until the end, there’s a special surprise for regulars. It’s a song. Did I spoil it?

(4:30) Why the name “Exit 73”
(5:30) The creation of Exit 73 Studios
(9:50) Chris Burns’ time at Augenblick Studios
(12:35) Why they decided to get a dedicated studio space
(14:00) Their early work up on YouTube (especially Detectaholic)
(17:08) COIN! Where the idea came from, video games references and the workflow used
(23:36) The many talents of animator Bob Fox (including music, sound effects, coding…)
(28:00) How does Exit 73 Studios get work?
(31:16) What is a normal day like?
(35:13) A discussion on past versions of Flash and their preference
(38:30) BOLTRON NINJA MASSACRE!
(40:33) What led to the decision to make BOLTRON in pixel art
(42:00) The “8bit Breakdown” experience and a discussion on the wrath of YouTube comments (43:45 Stephen reads a YouTube comment)
(45:56) Where the idea for BOLTRON came from
(46:40) Chris Burns breaks my brain with a revelation on his workflow
(55:00) Bob Fox’s music for BOLTRON NINJA MASSACRE
(56:00) Our most satisfying moments of the short and a discussion about Mortal Kombat
(59:29) Their new project — BOLTRON NINJA MASSACRE playable video game!
(1:04:00) Addressing the possibility for a COIN 2 and a COIN video game
(1:05:09) BRUTUS THE BOUND!
(1:09:13) Their dream job and a discussion on what pitching concepts to big studios is like
(1:13:27) What is their next step
(1:14:55) How many minutes of animation they produce a year, on average
(1:16:05) What is it that makes the two of them work so well as a team
(1:21:25) Their HE-MAN designs and whatever came of that gig
(1:23:28) The two-letter YouTube comment that drove Chris crazy
(1:24:20) AUDIENCE QUESTION “I know they animated COIN using Flash. [BOLTRON NINJA MASSACRE] has more of a pixel art aesthetic. Flash is usually known for clean brushwork and nice smooth lines, how were they able to achieve that very retro 16-bit look in Flash?” ~Chris
(1:28:12) AUDIENCE QUESTION “What was/is the ups and downs that they deal with in the studio?” ~Ronald
(1:29:47) AUDIENCE QUESTION “What is that ‘glue’ that joins them together as a team? How are those different backgrounds affecting the direction towards Exit 73 Studios is moving?” ~Juan #1
(1:32:29) AUDIENCE QUESTION “Have they found a way to work simultaneously on a single project or are they continuously jumping between different projects as soon as one of them gets done with his assigned task?” ~Juan #2
(1:33:39) AUDIENCE QUESTION “How do they manage their time between commissions and personal projects? How do they join forces to get things done in the quickest way possible?” ~Juan #3
(1:35:27) AUDIENCE QUESTION “Are there any advice they can give us on starting an animation studio? Especially in terms of finding the right people to work with!” ~Juan #4
(1:37:15) Exit 73 Studios wants your portfolios!
(1:40:40) OUTRO: Follow Exit 73 Studios on their website, facebook, twitter and Bob Fox’s Soundcloud
(1:42:51) Rob’s suggestion for a studio name-change…

… and stay until the end for more music by Bob Fox!

And please Rate/Review us on iTunes

… and Rate/Review us on Stitcher while you’re at it! (=