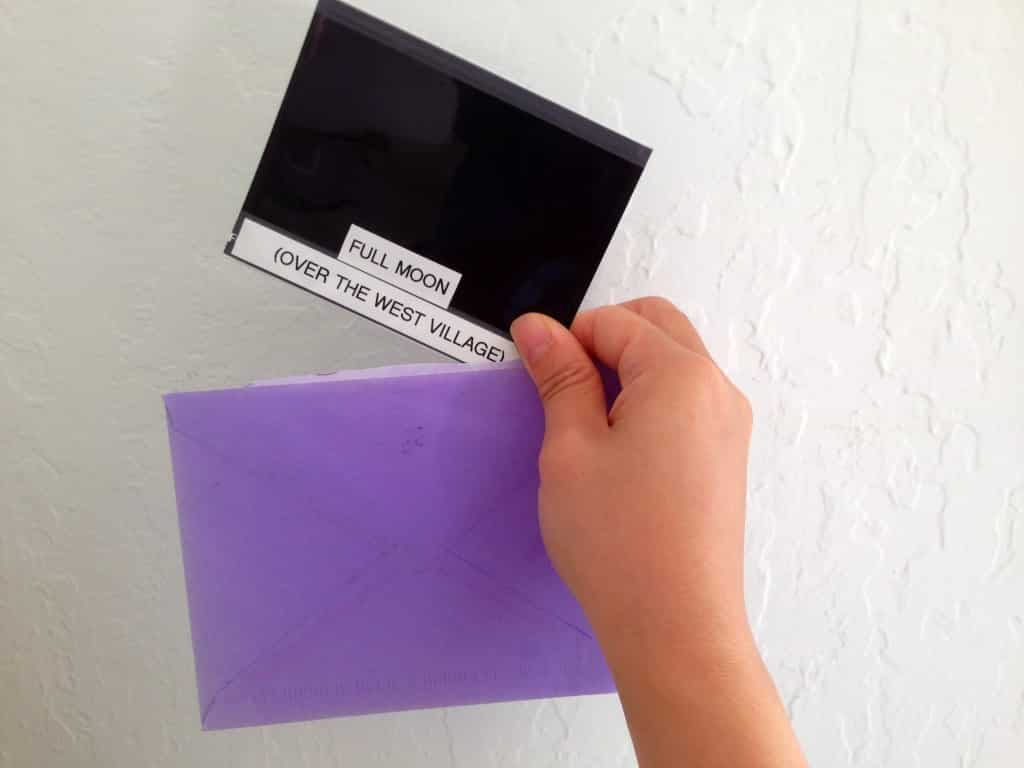 Katharine Henning shot a series of delinquent Polaroids for her contribution to the mail art exchange, Special Delivery in 2013. The artist packaged 27 snapshots into purple envelopes, keeping each photo facedown so that the first bit of information recipients encounter is the neat print on the photo’s backside—the title, Full Moon.  Flip the photo over, and encounter another moon: a lovely, bare ass slipping out of dark pants.

That benign title did not prepare me for the actual face of the photo. If I came across this image hung on a wall, I wouldn’t have experienced the piece in the same way.  To only interact with the face of the photo allows the viewer some level of control, some constant readiness to soak in the offensive image.  As a piece of mail, we get the pleasure of being fooled by the front and backside of the photo (or could we say that the photo has two backsides?). It’s not just an image of mooning. The envelope and flipped Polaroid work together as an action, an actual prank.

Creating the shots must have felt like a prank. Henning walked through several locations around the West Village mooning for a camera held by another friend.  In the background surrounding the artist’s pose, you can glimpse elegant pieces of architecture from brownstones in the neighborhood.  These secretive performances also took place on Super Bowl Sunday.  That night, fewer people traversed the streets as Henning pulled down her pants in the open air.    “ Took 10 minutes or so to get comfortable with taking my pants down in public, but then I was dropping trou like a pro,” Henning wrote in an email exchange. She recalls that the actual lunar Moon did not make an appearance.

I shared this piece with a friend while we waited for public transit in San Francisco.  She pulled out the photo, laughed, and slipped the picture back into the envelope while looking embarrassed.  Mooning expresses provocation, disrespect, or protest to another party. Henning gives us pure mooning, without context or reason. The piece acts as an affront to the viewer. This art teases and challenges, which are common traits of other strong video and photo works by Katharine Henning.  At the same time, I imagine how some viewers might feel turned off by the subject and chide “Full Moon” as lowbrow, or just young.  For me, the importance of the subject matter later became apparent during 2014 when I met this pointed phrase:

“… the control of female bodies.”

In 2014, I attended a reading of Emer Martin‘s third book, Baby Zero, at the San Francisco Public Library.   The Irish novelist used those words herself to describe key ideas in Baby Zero. In this piece, veiled female bodies in the Middle East contrast with the bodies of Buotox common to habitats like Malibu, California. Martin weaved into her talk the form of control carrying the deepest of consequences–abortion rights.  She described how control can manifest in different forms.  It is not just a physical veil.  It can also be an action, like the choice to modify or augment one’s body. Control can move deeply into one’s understanding of self and values, of one’s human rights.

During that year, I also picked up Azar Nafisi’s Reading Lolita in Tehran. In this memoir, an Iranian professor of literature (Nafisi) invites 7 former female students into her home to discuss Western classics that are deemed controversial and forbidden by the Iranian authorities of the 1990’s. They are not partaking in schoolwork. For 2 years every week, the women choose to read and gather out of the belief that fiction itself can offer a freedom that they could not find elsewhere.  In this special weekly retreat, remembered by paintings left leaning against walls and pitchers of flowers on the floor of Nafisi’s living room, the women also choose to remove the coverings they used in public. Nafisi documented the distinct differences between each women’s bodies, hair color, hair length, choice of colored shirts or pants. From Nafisi’s perspective, that freedom to be without coverings must have added another layer of bonding.

Though there are many facets and complexities in this book, I wanted to highlight just two important photographs that weave in and out of Nafisi’s memories near the beginning.  In the first photo, she and her students stand wearing black robes and scarves; in the second photo, they appear with the clothes worn beneath their coverings while standing in the same positions. Of the first photo, Nafisi writes that they stood as women “shaped by someone else’s dreams […]. In the second [photo], we appear as we imagined ourselves. In neither could we feel completely at home.”

The 2nd photo is Nafisi’s Full Moon at that time. The cost of sharing Nafisi’s picture would have been high, much higher than the public circulation of Henning’s Polaroids. When pitched together, Nafisi’s memoir and Henning’s photos indicate how manifold the experience of being a woman must be—how it appears as more of a spectrum than any one viewpoint of struggle or achievement.

I cannot imagine Henning’s photos in Tehran. These pictures appear in and are surely informed by a culture that feels familiar with seeing undressed women as art. Henning’s series also recalls Manet’s Olympia, (whose subject must also be remembered as the artist, Victorine Meurent) or Carlo Mollino’s secret Polaroids of the 1960’s.  As an artist who photographs many subjects without clothing, Ryan McGinley makes a distinction about they way Americans read nudity in an interview. By definition, the word “Nude” is meant to separate the naked form from any pornographic perspective, and yet, Americans still frequently confuse the Nude from any salacious intent. When thinking about Full Moon, we have an example of both humor and liberty in American culture.  It can be shared as artwork or conversation, but this unquestionably is not the case in other parts of the world.

Robert Szantyr initiated Special Delivery five years ago. Essentially, it consists of a community that sends art pieces through the postal service. Last year, seventeen art makers took on the project. We each created an artwork that exists in multiples, distributed the items, and then received about 17 artworks in return. Within this circle, I’m the one who blogs on various mailed items that leave lasting impressions or good questions.