THE (UN)FAIR is Back, Bigger, & More Popular Than Ever – Opening (Photos) 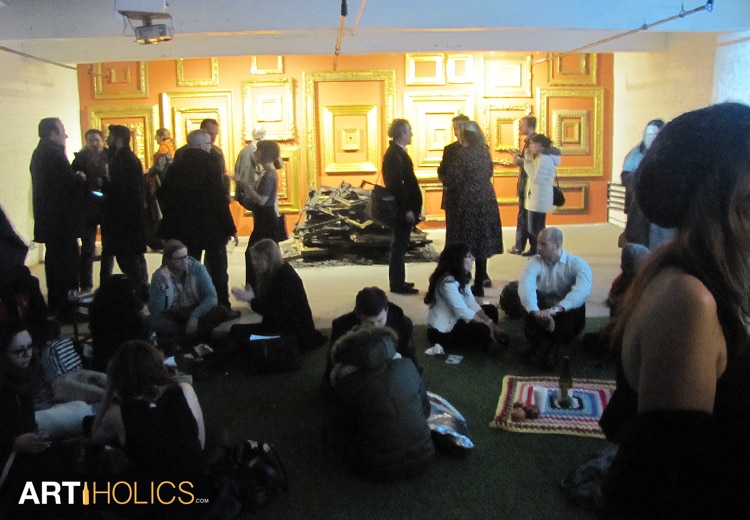 After checking out the opening reception for the first ever Clio Art Fair Jamie Martinez from Artefuse and I grabbed a train up to 55th street for the opening night party for The (UN)FAIR. Being press and a media sponsor of the event we buzzed the massive line and shot upstairs.

The first thing you couldn’t help but notice was that the place was packed.

I walked into the masse following a siren’s song and found a woman singing while standing right next to a beautiful Norman Rockwell painting, not the first (or ten thousandth ) thing I expected to see at THE (UN)FAIR but a pleasant surprise. Into the next room where for a few bucks they print your face on a t-shirt onto a baby’s body.

I quickly passed to the next room which had an intricate floor to ceiling vision obscuring sculptural installation.

On the wall beyond hung a few of those meta art world comic strips that Hyperallergic publishes. Into the large room where on the right is an interactive musical installation where you can play a series of instruments by pressing old school arcade buttons.

Ben & Jerry’s ice cream served to you by THE ACTUAL Ben & Jerry. After meeting Jerry, and initially guessing wrong about which ice cream hippy I was talking to I got some cookie dough ice cream (and you just had a taste memory of that flavor). It hit the spot and I ended up coming back a few more times over the course of the night. (Just FYI, THE (UN)FAIR has free unlimited Ben & Jerry’s for the run of the fair).

I ran into fellow Artiholics Jen Wallace, the curationista of THE (UN)FAIR and got a picture with her.

Her partner James Wallace who was acting as greeter to the elevator crowds.

While talking to him one of the poet performers walked into the hallway and started reciting poems for us from memory, and they were great (anyone know who this guy is?)

Last year, the first year of THE (UN)FAIR, the show only occupied half of the entire floor space on the third floor. This year the space was twice as big with two additional new large rooms making way for some large paintings.

As well as an area for performance.

And a massive projection piece, nearby which there are a few large patches of comfy AstroTurf where you can lounge out eating popcorn and ice cream while drinking wine in a small stackable mason jar like the most bizarre Willy Wonka factory picnic.

Max Noy, and Jamie both from Artefuse.

Artist Mark Parsons and one of his CartoGraphiPOP sculptures.

She will be performing again there on Saturday from 8 – 10 pm.

Written and Photographed by Cojo “Art Juggernaut”
(*editor’s note: I will finish crediting these photos and hyperlinking to artists websites next week when I am done seeing all these fairs and have time)