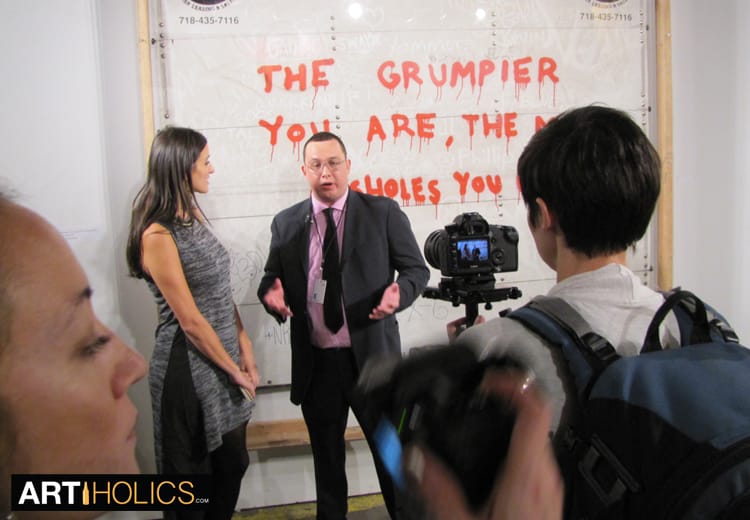 I am really loving SCOPE’s venue at Moynihan Station, they must have knocked down some walls and gutted the place a bit more than last year because the size of the floor plan seemed massive.  Makeshift unvarnished wood steps leading to higher ground, and long benches here and there for sitting (a luxury not easily found at most art fairs). 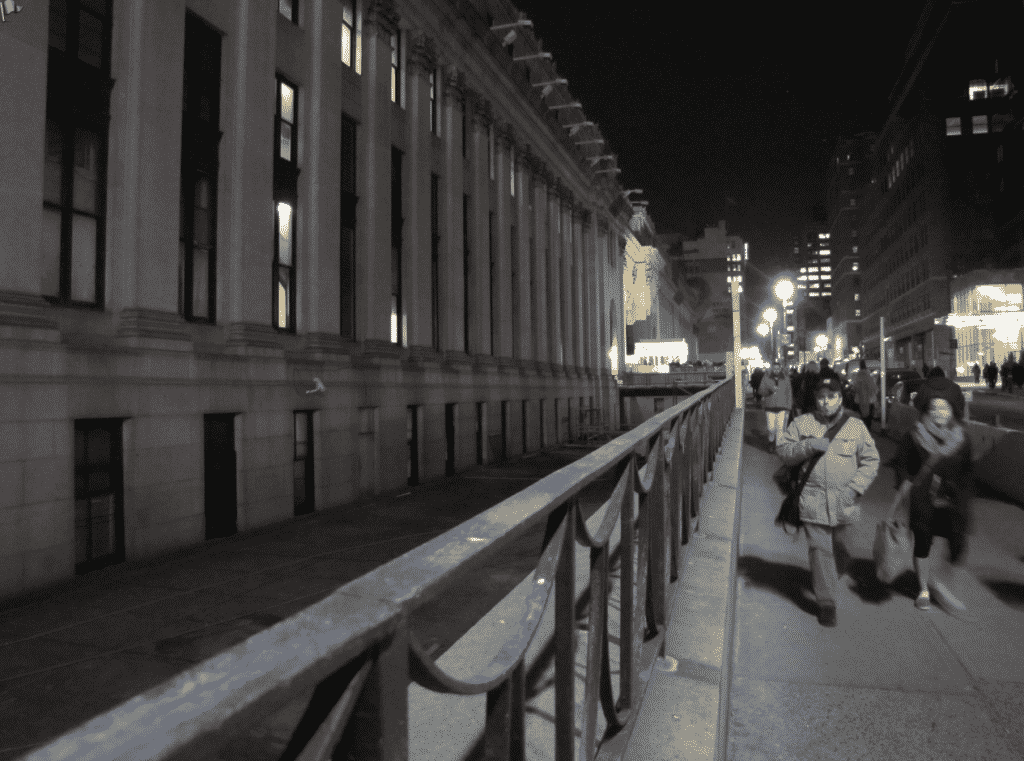 Exposed ancient metal ceiling girders with peeling paint were everywhere you looked, if you looked up that is.   What a  great contrast with the polished and illuminated gallery booths, and let’s face it,  it sure beats a tent.

I arrived and cut the line to the press check in.  I always bring my SCOPE press lanyard which has the logo printed all over it.  They bothered to do that one year and have ever since opted for just the plain black, having the official one makes me feel like not just press, but SUPER PRESS.

Art Now NY scored the first Banksy I’ve seen in a NY art fair.  Fell off the back of a truck maybe?

Pashmin Art Gallery, Hamburg, this artist Davood Roostaei was dressed as a cross between Michael Jackson and his actual paintings.

Fabien Castanier Gallery, Los Angeles was back again at SCOPE. Fabien posed for me in front of a few 44.75″ x 32.5″ pieces by Speedy Graphito.

Some really amazing larger than life hyperrealistic sculptures of Andy Warhol at different points in his life titled “ANDY” by Kazuhira Tsuji Copro Gallery, Santa Monica.  He should have been the one to do the Memorial in Union Square.

Saw a piece by Matt Neuman at Asterisk Projects, Brooklyn, which reminded me a lot of his piece I saw the night before at Clio Art Fair but with 12 more targets.

A bunch of pieces by David Kramer at Long-Sharp Gallery, Indianapolis.

I ran into sculptor Cheedah Shikaage Itchi Suuwah (Thunder Wolf), and we had a long talk about the 3d Printing sculpture he’s getting into.  He showed me his new digital work on his phone, amazing stuff.

Some pop work at Krause Gallery.  Including these really cool dimensional pieces that look like they might be made from thousands of straws cut to precise lengths.

A bunch of pieces by Karim Hamid at AUREUS Contemporary, Providence, RI.

Ran into Jeremiah Johnson who’s piece “House of Worship” house made out of pill bottles is debuting at Fountain Art Fair today.

A giant assemblage of Mixed Media on paper by Amanda Marie.  They are sold individually as 16″ x 20″ pieces, and 20″ x 24″ pieces, at Andenken Gallery, Amsterdam.

A picture of me at Fuchs Projects booth by Rafael Fuchs.

Artist Naomi Campbell.  Her pieces combine X-rays, aluminum, copper, plexiglass and drawings.  They are abstractions about gaming, and the blurred lines between reality and video games.

Artist Victor-John Villanueva  poses in front of a piece in Fuchs Project’s booth, he didn’t make the work, he just has a similar color scheme.

This one reminded me of works by H.R. Geiger.

An entire booth of works by Shen Jingdon, at Coral Contemporary, Nanjing.

The Jayson Atienza shoe at the bucketfeet shoe exhibit.

Lots of glitter at the Natalie Kates Projects, New York

One half of the Gentleman’s Game art team Jason Douglas Griffin.

They have collaborative works in the Magpi Projects booth, and they have their own booth at Fountain – where they had just come after having just finished setting it up.

Artist Joseph Grazi, who has two pieces in the Art Now NY booth, including this shark.

Also by Hubert Kretzschmra.  I first met Hubert at the Art of The Rolling Stones Show.

Photographer Mia Tyler in front of a portrait of her father, Aerosmith frontman Steven Tyler.

Photographer and curator at Fuchs Projects, Rafael Fuchs, in front of a few of the pieces from his most recent series about his horrible landlords.

It was a great show as per usual, and AS I HAD PREDICTED earlier in the week. After taking it all in, I headed out into the night to shoot down to SoHo for Mark DeMaio’s opening at Sacred Gallery.  This week really is the Superbowl of art going.