The Silver Linings of Artistic Survival Michael Alan Rages On in the L.E.S. 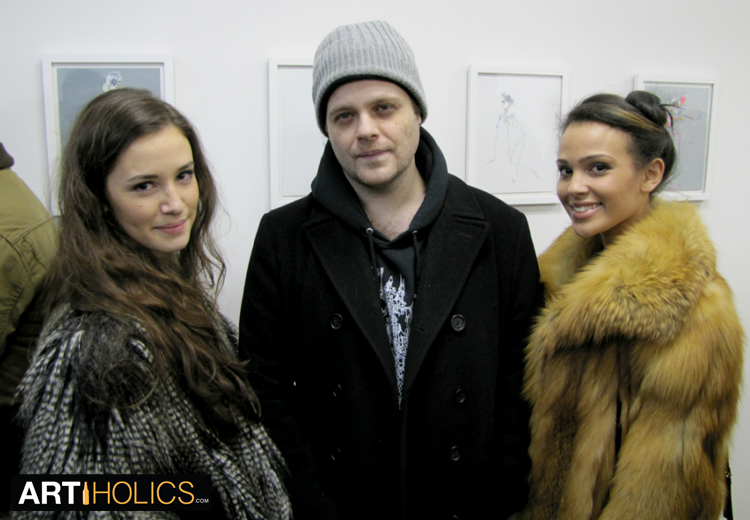 If you haven’t made it down to Artist Michael Alan ‘Alien’s most recent solo exhibition The Energy Reader at Gasser Grunert Gallery on 38 Orchard Street, you have just a few days left. The closing reception is this Sunday, February 23rd from 3-8pm. All are invited to come meet the artist, who will drawing live at the closing.  Alan will draw the crowd and talk about his work.

Although Michael Alan and I are nearly the same age (he graduated a year behind me at SVA) we never actually met in college.  We were only introduced through mutual artist friends a few years ago, and we’ve since become friends, which makes it tough to see what kind of pain the guy is in.

Contrary to how he might appear when he’s in his element during his “Living Installation” performances (surrounded by nude flesh, paint, yarn and fabric, amongst melodic chaos) 2013 was a hard year for Michael Alan and 2014 doesn’t look like it’s getting much easier health wise.  He’s an artist with a creative mind and vision, who has developed (by necessity) the uncanny ability to trudge forward mentally and artistically, while his physical body continues to deal him a progressively shittier hand.

He actually suffered a mild heart attack the night before the opening for this show (the photo I took of him at the top of this article was at the opening).  He didn’t go to the hospital till after the show because he didn’t “want to get locked in” and miss it.

As reported last month in an article in Huff Post about this show:

Toward the end of last year, Alan was diagnosed with a blood clot disease known as deep venous thrombosis (DVT), a condition that alone has the potential for catastrophic outcomes. But wait, there’s more. His DVT comes as an addition to a laundry list of health complications that includes a broken lower spine, nerve rerouting, and a minor heart attack.

“This show is mostly composed of work I made in bed while healing, either in the hospital or my bed at home recovering from surgeries and my new lovely DVT,” said Alan. “Before I was investigating the human race and praising our frailness and our ability to live through. Now the story for me has turned and the work became a place for me to grow and begin really looking inward on my own fragile time and self-reflection.” – via. The Huffington Post.

He’s done hundreds of them over past ten years, in which he paints-on, dresses, and interacts with nude modes over a performance art endurance level- period of time, set to music, his own music which he creates in collaboration with other artists such as Tommy Ramone, Japanther, Jello Biafra, and The Boredums.

The current show at Gasser Grunert Gallery in the Lower East Side is less live performance, more aftermath.  It’s the culmination of a lifetime of drawing and painting scratched and lined into paper and canvas, cut up and reconnected in beautiful white frames.  Here are some photos from the opening reception.

Michael Alan was born in New York in 1977. His work has been featured in 7 New York solo shows and over 200 group shows. His work has been discussed in over 200 publications, books and media sources, including the New York Times, The Huffington Post, Bomb Magazine, Art 21, Marie Claire Italia, Art+Auction, The New York Post, Fox Channel 5, The Village Voice, Time Out New York, and Hyperallergic.  Read more about The Energy Reader on Artefuse, and on The Huffington Post