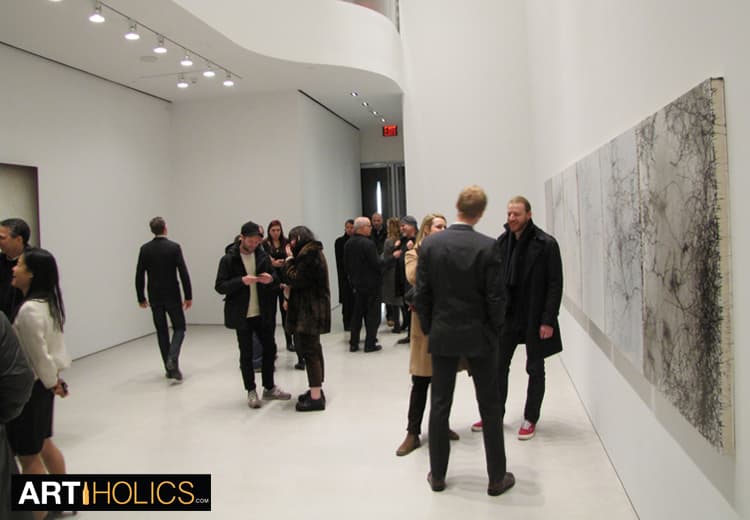 The solo exhibition of artist Emil Lukas at Sperone Westwater in the Lower East Side closes on Saturday, February 22nd.  This is your last chance to take a look at his two major bodies of works being presented: Thread Paintings and Larvae Paintings.

The thread paintings aren’t actually paintings at all, but the perfect use of thread to create the illusion of minimalist gradients and color fields on canvas.

The illusion of gradational color is created by the overlying strands of various colored threads which create a density of tone.

Much like overlying simple black strokes when hatching or crosshatching can build up to solid black.

These are “of unsurpassed beauty and formal complexity informed by a rigorous process of discovery and experimentation.  As an artist, Lukas is unique in his ability to harness the physical attributes of materials and organic processes” to quote Harry Philbrick, Director of the Museum of the Pennsylvania Academy of the Fine Arts, who interviewed the artist for the accompanying catalogue.

Lukas’ distinctive use of everyday organic materials, such as thread, silk, or larvae, and his innovative techniques create intricate works which engage the viewer in an intimate and contemplative way. The accumulation of lines characterizes Lukas’ works — materials do not exist independently, but are layered and stratified.  His process is one in which creation and composition occur simultaneously.

Thread Paintings, such as the four part work Artillery or Poppy Red, 2013, engage with color, opacity, density as well as reflection of light, creating radiant three-dimensional objects which the artist describes as “atmospheres”.

Larvae Paintings, such as Cloud, 2013, emphasize the surfaces on which sinuous lines meander in a random composition, the result of larvae traveling across the canvas drawing traces of ink and paint.

The lines are so delicate and spontaneous, because the ink covered larvae don’t understand they are creating artwork

Emil Lukas photographed by Cojo at the opening reception.

Born in Pittsburgh, Pennsylvania, in 1964, Emil Lukas has exhibited throughout the United States and abroad, including the solo exhibition “Emil Lukas: Connection to the Curious” at The Aldrich Contemporary Art Museum in Ridgefield, CT, in 2005. His work is in important private and public collections, such as the Panza Collection, Italy; The Dakis Joannou Collection, Greece; and the Crystal Bridges Museum of American Art, Bentonville, Arkansas.