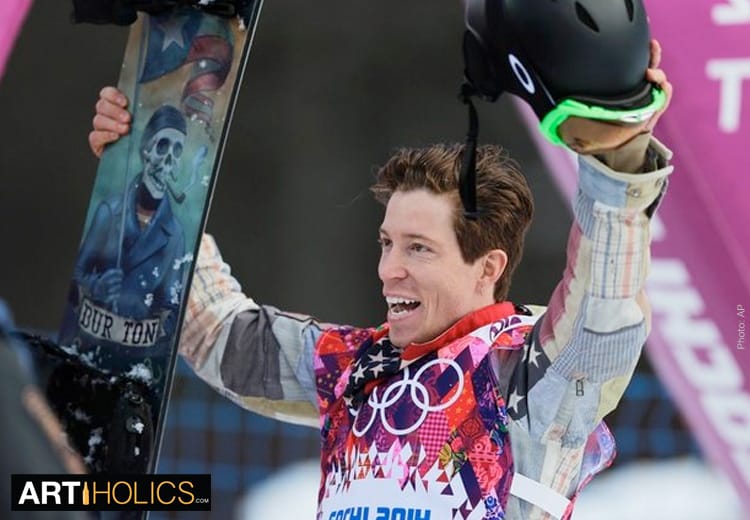 It is a common misconception that art and sports are the most opposite of worlds.  This may have been the case in the original Ancient Olympic Games in Greece when athletes competed naked or in heavy armor in the hopes of winning olive leaf crowns to honor Zeus, but things have changed. The olive crowns have copyright symbols.

Every country’s athletes are branded from head to toe.  From their equipment, to their outfits, to their logos, to their sponsors’ logos, their high-tech streamlined speed suits, down to the Olympic Mascots and even the Medals they vie for.  All of these things are designed by artists.  Unsung & uncredited paint slinging, typography laying, color coordinating heroes who from behind the scenes help to make our athletes look badass while they are kicking ass.

In the Winter Olympic Games one of the most freedom an artist can be allotted (as far as paint-per-square-inch) is in the design of the snowboard artwork for a top athelete. It is really like designing the front and back of three vinyl album covers if you think about how big those boards are, and how much screen time they get.

When I heard from friend and fellow artist Ashli that she was friends with Derek Nobbs. the artist who designed Shaun White’s Olympic board, I reached out to him and scored an exclusive interview for Artiholics.com  Let’s get the scoop on how he landed the most coveted bit of painted real estate in Sochi.

In corresponding with him he emailed this picture of the painting “Never Surrender” which is previously unreleased and includes much of the board’s top art.

Artiholics: How long did it take for you to get the art finished?
Derek Nobbs: “It’s not finished. I only finished what was required for the board at the time.  I’ve been meaning to get back to working on them so they will be complete stand alone paintings but I haven’t had the time to finish them all. Hopefully I will get those originals done this spring and will have them available to collectors.”

Artiholics: The bottom of the board would have been made up of pieces from multiple paintings I imagine?
Derek Nobbs: “Yes, I don’t have any complete pics of the bottom of the board. I did the knives one piece and the coolest looking skull on the other. There are two different skulls on the bottom, one with an eye patch and a mustache and one with no patch and a beard. I do have this progress shot which I posted on my instagram @dereknobbsart.”

Artiholics: So your “mostly finished” art is done in what medium?
Derek Nobbs: “I work in watercolor, gouache, and ink.”

Artiholics: Artists everywhere are probably wondering how you got chosen to do the artwork on the two time Winter Olympic Gold Medal Snowboarder’s board?
Derek Nobbs: “Shaun and Burton dug my work, especially my nautical pieces so that’s the theme they asked for.”

Artiholics: Have you designed boards for any other athletes?
Derek Nobbs: “Just Mr. White.“

Artiholics: Have you made boards for him before?
Derek Nobbs: “Yes I made one for the previous year. He rode it in the X Games among other events. The board he rode in this years Olympics features the same top art as the year before, although the background color has been changed to black.”

Artiholics: So, what sort of art direction did Shaun give you?
Derek Nobbs: “Very vague art direction leaving it up to me.  Other than the theme, and some very specific elements like a hummingbird or the idea of a two sided/mirrored approach to the base design. Ideas came from Shaun, Burton, *JDK , and myself. They did a lot of picking out elements from my body of work to apply to the design.”
*JDK is the design firm in charge of Burton’s TWC (The White Collection) which is Shaun’s high end board.

Artiholics: How many sketches did you have to do before you got the go ahead to finish in paint?
Derek Nobbs: “I did probably did around 30 sketches, if I remember correctly. Everyone wanted this to be the best it can be since it was going to be the board Shaun rode in the Olympics. Ultimately I got final say in what I delivered but there was a lot of push and pull, pick and choose, like there is with any commercial project, but I think in the end everyone was happy with the results.”

Artiholics: Did you get a chance to watch the Olympics?
Derek Nobbs: “I don’t get cable or satellite tv. I did see a few clips online.”

Artiholics: I just read that Shaun White gave the boards he used in Sochi to Make-A-Wish kids after the games, have you heard about that? (click above image to read story)
Derek Nobbs: “I hadn’t heard that but I think it’s great! “

Written by Cojo ‘Art Juggernaut”
Derek Nobbs’ artwork was published on Artiholics with his permission and is copyright ©DEREK NOBBS.