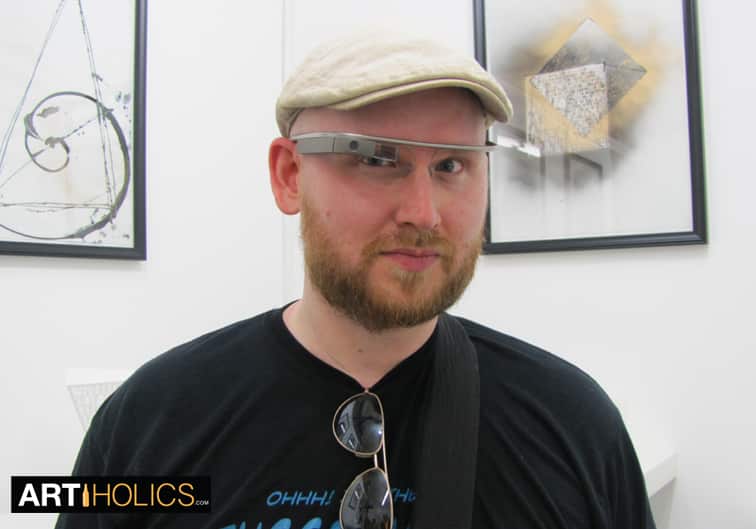 Big brother is watching you, in the mirror.  Just a day before these pictures were taken I was writing about how the future tech is going to be a lot more clear, and now here I am, at 566 Johnson Ave., in Bushwick, Brooklyn during the Bushwick Open Studios trying on a pair of Google Glass myself, and taking the technology for a test drive.

The first thing people say is “they look like shit!” I agree, they do, but this is the short sighted view of them.  The stylish designer sunglasses you currently wear, picture them as Google glasses, now you get the idea.  This is a scary near-future we are about to be embracing friends.  A future where the time is in the upper right corner of your VISION at all times.  Where the things you are seeing can be recorded on command, and tweeted to the web on command.

When I first tried them on and they took a minute to get used to.

Like firing a gun I felt compelled to close one eye to focus on what I was seeing in the other, obviously a Google Glass n00b..  A tiny translucent screen hovers above and to the right of your right eye.  You can swipe down on the plastic on the side of your face to scroll through the images (like swiping your finger on an iPhone screen) to see what pictures you have taken thus far.  It was displaying 4 images at a time stacked in two rows of two.

Artist Ashley Zelenski (One of only about 500 of these prototypes) takes these pictures of me with my camera as I command the glasses to take a picture of her.

It’s as simple as saying “OK Glass, take a picture.”

Here is the first picture I have ever shot by voice command and without holding a camera.  A little blurry I know, I had no idea what I was doing.  Here’s how it LOOKS ON TWITTER.

As you can see in this close-up there is no actual glass to the Google Glass, except for the rectangular chunk that obscures most of your right eye.  The rest of it is just frame, camera, and computer.  In this shot you can see that she has taken a picture and it’s holding still framed in the screen until she tweets it or scrolls out.

This is the standby screen.  If you think girls are distracted when they are talking to you now, imagine when they have the internet buzzing in front of their eye at all times.  Good luck with that.

Ashley Zelenski is an amazing 3D sculptor who is one of the pioneers of 3D sculptural printing.

Here is some of her work on display in her open studio.

She’s also the gallery/ studio director of Active Space. You can follow Ashley on Twitter to see all the photos she uploads from her Google Glass each day  They will most definitely not be all blurry like my shitty attempt.