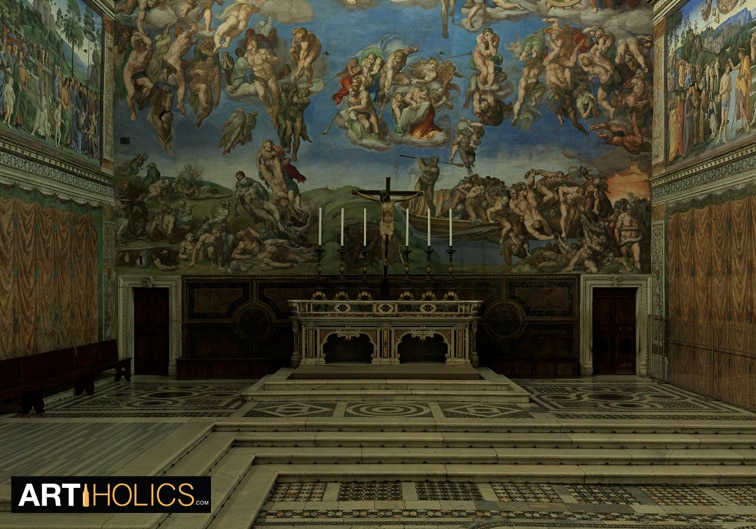 On the Vatican’s website there is an amazing page with a 360 degree view of the interior art of the Sistine Chapel.  Using your keyboard arrows you can maneuver all around the room, zoom in and out on the individual paintings that make up the most famous ceiling paint job in the world.

Having never been to Vatican City, I have never looked upon this piece in 3D- so this 3D simulation is the closest thing thus far I have experienced shy of being there.

I noticed a few things when seeing the work all back to back rather than individual pictures isolated on pages of a book.  This is a kind of insight that you get from watching an entire episodic TV series on Netflix back to back, rather than the way it was originally presented (one a week and broken up by commercials), a phenomenon which doesn’t yet have a name, let’s call it a “play-all revelation.”

Although it is kind of cool that these are paintings in a church featuring nudity of all sorts, it becomes apparent that all the dudes are really ripped, and all the women are really dudes.

Michelangelo SUCKS at drawing women.  I hadn’t really realized it before, because I don’t know of many of his pieces that depict women, but the few you see in this painting look just like muscular men, with some bolted on conically shaped cartoonish boobs.  Look at that arm on the woman in a green dress.  Now look at this photo of a female body builder someone on deviantart tinted to look like She-Hulk.

The Michelangelo woman has larger biceps and forearms than this female body builder.  Michaelangelo’s women also have massive adams apples, and most likely cocks.

My best guess is that he didn’t hire female models to pose nude for him.  If anything he had his already buff team of male models throw on a dress and pose, and either painted a female face from memory, or just had females pose for the face only.

And check out this other weirdness, he sucked at drawing old people too.  Even the old guys depicted in these sprawling gay brawls are chiseled like brick shit houses. You want to know what the pumped athlete looks like when they get old?  Look to Jack Lalanne- who never stopped working out.  There is a point were your 8-pack goes south.

It’s funny that these old painting masters are so highly regarded.  Today Michelangelo would be looked at as a mediocre teenage comic book artist.  A guy who is able to draw muscular dudes really well, but has never seen a real woman naked, so he draws them in really bizarre proportions.

This is a prime example of why in art school you draw female nudes, male nudes, super strong people, super skinny people, overweight people, as well as old, and ugly art models.  You need to see how the structures work without clothes, how aging, weight, and musculature effects the human form in order to understand how to paint them.  Otherwise you end up with a ceiling that looks like what we have here, a less-tattooed naked version of a WWE Royal Rumble.