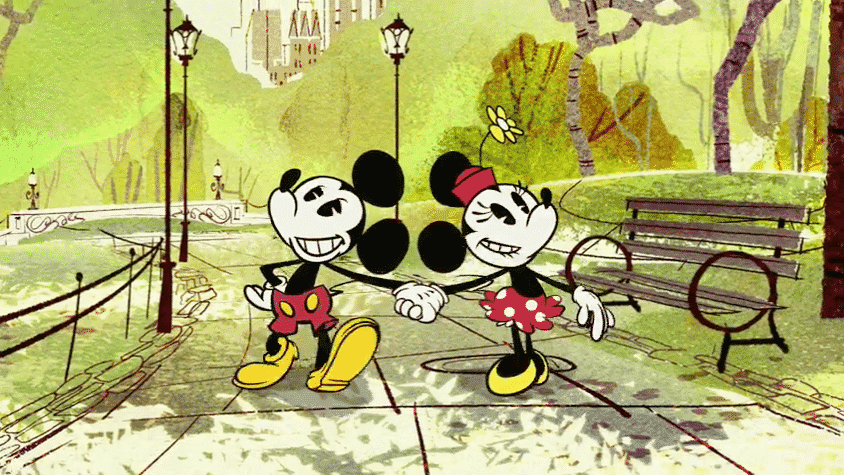 Another Mickey Mouse short was released by Disney, this time in English, and taking place in NY no less.  New York Weenie is the closest thing to gross-out Ren & Stimpy, John Kricfalusi style animation I’ve seen in years, and it’s by DISNEY!  And it’s using their MOST BRANDED CHARACTER!

Far more over-the-top than their last Mickey short yet not as over the top as that crazy floor slap gif from the colorized Mickey’s Choo Choo cartoon from 1929 (the era these new cartoons are harkening back to.

They have loosened their reigns on the mouse, and are allowing him to be more compromised and unhinged than we have ever seen him. SEE VIDEO HERE (NOT YET ON YOUTUBE).  This is a risk most giant corporations don’t usually take with their cash cow, but this is a new era of Disney Mickey shorts.

It’s surreal for Disney to be let’s say “Paying an homage” to Ren & Stimpy, considering the linage of both cartoons.

Mickey is getting frustrated with hot dog.

Classic Stimpy getting frustrated with Ren.

Which was a staple of the Ren & Stimpy toons.

One thing that rubbed me weird is that this happened…

If a pig is gambling…

Against a the hot dog.  You would think he would be a little turned off by it.  It would be like us gambling against a sack of sentient ground up human lips, noses, and anuses.  It might cause you to fold and call it a day.