Fountain Art Fair 2014: What to Expect 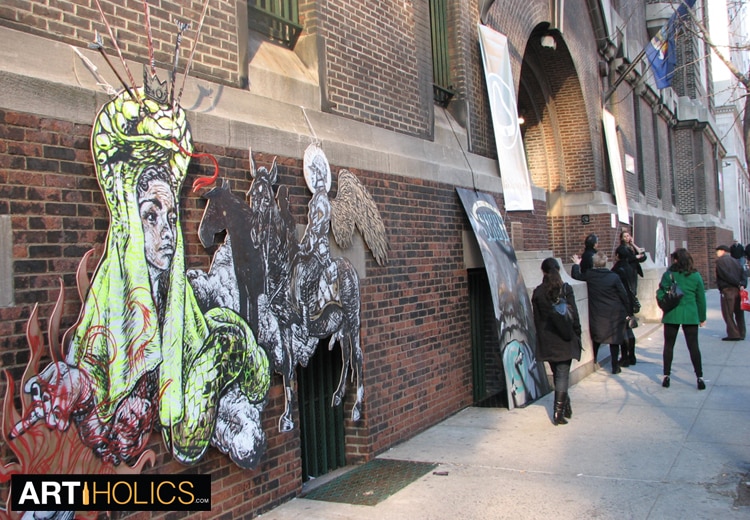 About Fountain (In Their Words)

Fountain Art Fair was founded in 2006 by David Kesting, John Leo, and Lincoln Capla as an attempt to leverage support for smaller independent galleries, collectives and artists who wished to gain access to a larger audience of collectors and critics. From its roots deep within the independent Williamsburg, Brooklyn art scene, Fountain has grown to represent over 80 international avant garde galleries and projects, showcasing progressive primary-market works in New York, Miami, Chicago and Los Angeles.

DJ’s take over the stage at night.

The Scoop on The Fountain Art Fair From An Artiholic:
I love fountain, it is such a fun fair to attend and you get a lot of bang for your buck.  Lots of good artists, also a lot of not so good, but the needles in the haystacks are in the numbers at this fair.  This is truly the independent fair as usually it’s one artist, or a group of artists splitting a booth on their own.  No galleries need be involved, although a lot of booths are represented by galleries.  It’s one of the cheapest art fairs for artists to get work in (per square foot) so the bar is set a little lower than a Scope or Pulse, and leaves the door wide open to untrained artists, street artists, and Brooklyn artists on the rise.

You will see a lot of drawing at this fair, a lot of painting, and a lot of pop.  I have heard it referred to many times in art circles as “amateur hour” but there are generally some stand outs in the masses, and as years go by you will start to see artists who got their start at Fountain’s careers shoot them up to larger galleries, and land them larger exposure at the top tier fairs like Scope and Volta.

You will be likely to meet a lot of artists if you wander around this fair, as most booths are artist run.  It is a great way to talk to artists and have them talk to you about their work.  Almost everyone is friendly and open here, and there is very little pretension.  You will find a few street artist wanna-be-banksies aka Mini-Banksys, who don’t want to have their photo taken, which is annoying as fuck, and almost comical.

When I  first attended this fair in 2009 it was on the frying pan pier.  In a tent that leaked when it rained.  There was a basement floor called the Murder Lounge

Where a small collective of Greenpoint artists would always show together. Fountain in gaining credibility and exposure has moved several avenues over to the Lexington Ave Armory and now has a solid foundation and doesn’t have to worry about dark clouds.

They still have a section of the new location called The Murder Lounge, but it’s more of just a tribute.

Fountain sculpture in honor of the Marcel Duchamp R.Mutt signed piece titled Fountain after which this fair is named.  Fountain is a 1917 work widely attributed to Marcel Duchamp. The scandalous work was a porcelain urinal, which was signed “R.Mutt” and titled Fountain. Submitted for the exhibition of the Society of Independent Artists in 1917, Fountain was rejected by the committee, even though the rules stated that all works would be accepted from artists who paid the fee.  The exhibition took place in the building where The Fountain Art Fair now resides almost a hundred years later.

Positives: A lot of fun, a lot of really great artists and a lot of good drawing.  Live painting, performances, music.  It is almost like getting a first glimpse into the unsigned talent of the art world.  You see what bubbles up from Brooklyn, Queens, and the outer boroughs before it gets snagged up by the machine.  The Friday opening night reception is the most fun you will have at any of the art fairs with open bar and live music – it becomes a party – and I will see you there.  If you are a fan of drawing, street art, illustration, comics, lowbrow, or graffiti, you will really enjoy yourself.  If you are a collector you can find a great deals on artwork by emerging artists here, and fill your apartment for a fraction of the price you would have to pay at the other fairs.

Negatives: Depending on your perspective, you will either come away loving, or hating Fountain.  If you like drawing and painting, you will have a good time.  If you really enjoy The Independent, you will probably not like Fountain so much.  If you are looking for Museum Quality work, you will not like Fountain.  It is very unpolished, but that’s what gives it it’s underground handmade charm.  Although I have a great time at Fountain it is one of the lower tier fairs and doesn’t get much love from the mainstream art press, but art blogs and Scene and Alt magazines like Paper are all over it.