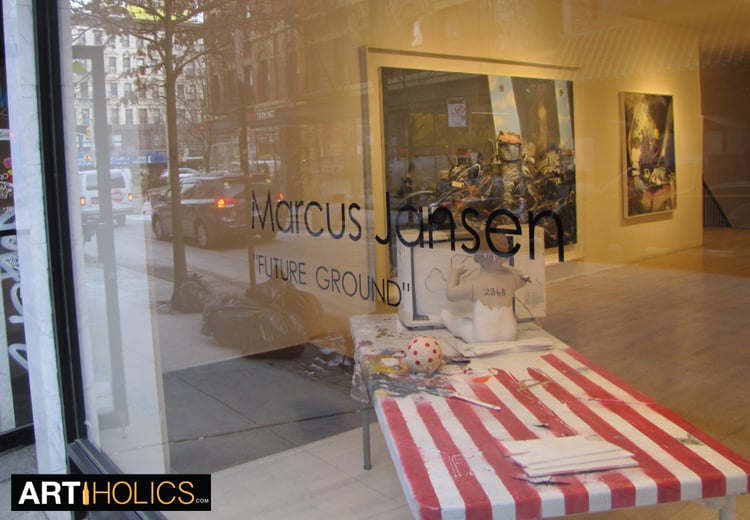 New York – Tuesday, March 4, 2014
As Armory arts week kicks off I generally like to break up the overwhelming big box store art experience by hitting a few “actual” gallery openings and alternate art events as well. Just because the fairs are in town for four days doesn’t mean the bands don’t play on at the year round brick and mortar art exhibition venues.

The first show I wanted to make sure to check out was Marcus Jansen: FUTURE GROUND.  The  forty-five year old trilingual Fort Meyers, Florida artist was born in the boogie down Bronx to a German Dad and Jamaican Mom.  He was raised in the Bronx,  Queens, and Germany.  Jansen finally returns to his roots with his first ever New York City solo show at Castle Fitzjohns Gallery.

Cyber surveillance on wasteland
It was only a brisk walk from Spring/Break Art Show (which was having it’s press preview from 2pm – 4pm). I am having my 10Subjects solo show at Castle Fitzjohns in September so the more variations I see of how they layout the space the better.

Rock a Bye Baby
I arrived early for the press preview because I had yet to meet the gallery’s new director Brooke Lynn McGowan. As she was in the middle of last minute show prep we casually chatted about the daunting task of writing about all of the art fairs, and as the conversation got more intense I realized I was preventing her from working.

I was introduced to Marcus Jansen and was lead on a brief tour of his work. He is inspired by graffiti as well as the Die Brücke movement and is a pioneer of modern urban expressionism.

When I asked Jansen which work he would like to pose in front of he chose the “Faceless” series.  The series examines anonymous men of great power who mange to escape blame or punishment for international scandals by literally and violently exiting the mode of portraiture.
Marcus Jansen: Future Ground Open Reception tonight.
Tuesday March 4th, 2014 |  7pm – 10pm
Castle Fitzjohns Gallery – 98 Orchard Street., NY, NY
Written and Photographed by Cojo “Art Juggernaut”
- Advertisement -