Her Family Portraits Are Just Like Yours… And Yours…And Yours 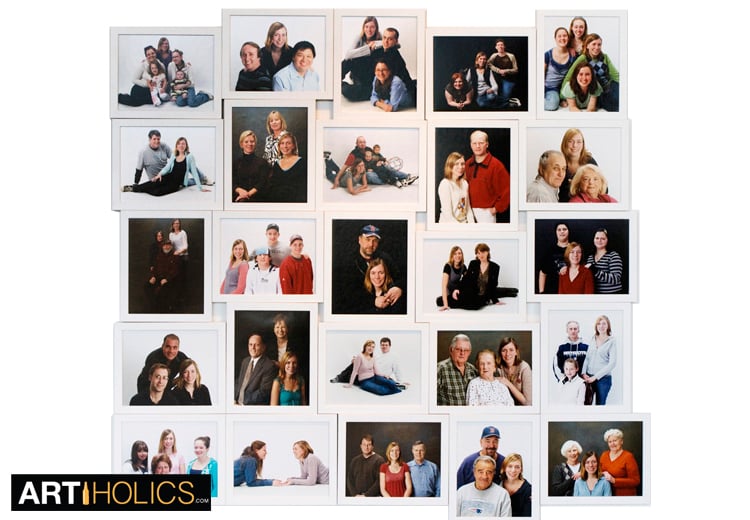 One of the people in these 25 different family portraits looks familiar.

In 2008 over the course of one year artist Christine Rogers posed for 25 family portraits in mall portrait studios.  Unlike your family portraits where you posed lovingly with your family, she is posed lovingly with strangers who looked like they could be related to her.  She met these people in various malls across America.  Check out the photos from her series “New Family,” and then read the interview, the shots are hilarious, and the story behind the project and the making of it just makes it that much better:

Artiholics: “How did you find these people to pose with you?”

Christine Rogers: “They are strangers in a mall who resembled me.  These are really documentary photos, probably the most documentary work I’ve ever done.”

Artiholics: “So what was your pitch to get strangers to pose with you?”

Christine Rogers: “I asked them if they would be in a photo with me.  At first I asked if I could sit in on their photos, and they usually said no, because I realized they didn’t need me, they were already rounded out.  So then I started asking other people who looked like they could be related to me if they’d be in a photo with me, and then they’d say yes.”

Artiholics: “Why do you think they agreed, did they ever mention why?”

Christine Rogers: “Because I think they needed one of me (they were missing one of me in their family to round them out) One guy would say, ‘I don’t have a sister this would be fun.”  Another guy’s wife had just left him. Everyone had a different reason, some people missed their grandkids.  Maybe I reminded them of themselves. ”

Artiholics: “Did you give them anything in exchange?”

Artiholics: “How long did it take you to collect all 25?”

Christine Rogers: “I worked on it for a year.  Mostly at various malls in Boston and New Hampshire, some on Las Vegas.  I liked that I spent about a year.  I say it’s ongoing in theory,  we’ll see if i need to make more one day.”

Artiholics: “So each one you have a different outfit?  I love that it spans an entire year and you wear different clothes, it’s not like a fake casting call on one day.”

Christine Rogers: ” Yeah, that was tough I don’t really have a lot of clothes, I had to dig deep.”

Christine Rogers: “I was 25 when i started, it felt like a good number.”

Artiholics: “If you were born into 25 different families and got to the age of 25, this is how your life would have looked – captured in one frame, that makes sense.”

Artiholics: “That is nuts, but psychologically it makes total sense.”

Christine Rogers: “Sometimes the photographer would have no idea and sort of not be able to figure out our relationship just quite, maybe we’re related maybe we’re married maybe he’s my dad? So she’d ask and i’d say, ‘I was thinking father.’ and the guy posing with me would say, ‘NEW WIFE!’ and she’d just look blankly and proceed totally confused.”

Christine Rogers: “They’re very special to me. they’re really the only art object I’ve allowed to cross over into my real life and become sort of special to me on a personal level if that makes sense.  The personal backstory to the project is that I never met my dad, so ever since I was little if a guy looked at me for more than 10 seconds I’d start to wonder if it was my dad coming for me”

Artiholics: “Oh, this really takes the project to another level.”

Christine Rogers: “I made these thinking one of these men could be him.  It started with fathers, and then it evolved, because I would like a sister.  My parent’s divorced when I was 8-months-old and he was not allowed to see us.  I know I must have tons of half brothers and sisters out there that I’ve never met, so they could have been there too. ”

Artiholics: “This has just turned into an UPWorthy project, or something you’d see on Oprah.”

Christine Rogers: “There was always an electric charge with strangers for me because of this unknowing.  There was a wonder about them, magic, or what have you.  Part of it too I guess I wanted to send out a ripple into the universe something that would strike him, or hurt him somehow.”

Artiholics: “So maybe he will see this article and can get in touch with you.”

Christine Rogers: “It’s funny now to say…these are very childlike fantasies I think. Since the time I did this project in 2008 I’ve found out that my dad has died, so these are the closest I’m gonna get to reality.”

To view Christine Roger’s other photography work, including the follow-up project to this work in which she confronts the fact that her father is dead, check out her website https://www.cerogers.net

Somehow Form a Family contains photographs and a video from a family road trip I took by myself, begun this summer and completed this winter. I set out to do all the things that normal families do on these adventures: a trip to the Grand Canyon, a trip to some amusement parks, some roadside attractions, all the while headed westward to California. I also made stops where my father grew up, in Dumas, Texas. I had not only set out on this trip to do what normal families do, but to understand my own history. I was also revisiting the faith-based proposal of ’50’s and ’60’s photography: that through taking pictures I could learn something about myself and about the world. I am seeking to understand and redefine American ideals of God and Family by taking possession of these ideals; breaking them apart and putting them back together.

The rest of my trip west to California was spent thinking about Dumas: its endless maze of suburban roads, cul-de-sacs and beautiful sunsets. I found the further west I went, the more I saw only young children, running around on their own in the mountains, trying to shake off some kind of residue.

As the trip comes to an end, so does the video. They both end the same way: a return home to my mother.

The photographs and video are paired with a series of “family portraits” made with strangers who could be in some way related to me.

These portraits examine the construction of family through the construction of the family portrait. In my own life, I do not know half of my family, including many half brothers and sisters. The last time I saw my father, I was 8 months old, which is to say that I have never actually seen him.

As a consequence, strangers take on a new meaning: the average stranger might be related to me. We could be family. I have been going to the mall and asking strangers if they would pose in a family portrait with me. The final product is a singular document, purchased from the portrait studio. In continuing this project I am narrating a new life for myself, and building a family album that is simultaneously possible and impossible. I really like what Emerson says: “We live in succession, in division, in parts, in particles. Meantime within man is the soul of the whole; …to which every part and particle is equally related…. The act of seeing and the thing seen, the seer and the spectacle, the subject and the object, are one.”

Special thanks to Christine for digging out the box with these portraits in it and photographing each one for us, she went above and beyond.