Context is Everything: Summer Art Festival at Waterfall Mansion 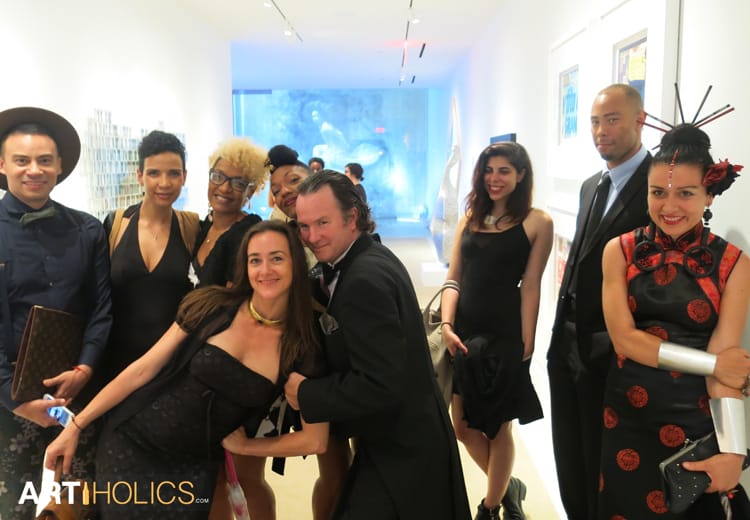 When Kate Shin invited me to the opening of the Summer Art Festival at the Waterfall Mansion I had to come back to the city. Not that Manhattan was in absolute need of another gallery, but this was different. This is an absolutely new concept.

I buy art to put it at home. There are people out there using safes in Switzerland to stack their art stock in the dark. Not me. I want to enjoy my new piece from the couch, the kitchen, or the bathtub, naturally. I want to invite my friends with any excuse to talk about my new acquisition and track its value growth dinner after dinner.

Kate Shin and co-curator Alessandro Berni are challenging the idea of the warehouse gallery, where they intend for the art to be decontextualized. That very expression is an oxymoron. Context is always present, and unavoidable. The question is finding the right space. The Summer Art Festival offers a living space, the atmosphere of an enlightened lifestyle.

There is a Nam June Paik, a piece of Art History, in a wide room presided by the tallest residential waterfall of NYC, a classic Andy Warhol in the lobby of the second floor holds conversation with the anthropomorphic ceramic of one of the Michael Lucero’s sculptures, found in spaces across the rooms and corridors of the Mansion. There are also surprises. Close to a million dollar Murakami painting there sits the new work of Borinquen Gallo: a sunny ode to the danger of narcissism. Nobody was indifferent when Jedd Garet, one of the most prominent figures of the American neo-expressionism of the 80s, after a silent impasse of twenty years, reemerged in the new digital period. Friends and collectors celebrated Garet’s reappearance, in awe of his newest work.

It was a lively opening full of champagne and exclusive guests, but the feeling of being in a real house never abandoned me. One can look at a Jessica Stockholder or one of the last works of Seung Mo Park sitting within the last works of Karim Rashid or Antonio Pio Saracino who recently erected the iconic “The Guardians” at Three Bryant Park. One can envision himself coming back home after a feisty day at work, and leaving his metaphoric boxing gloves at the sideboard before dining with family and friends. Gloves that Robin Antar carved in marble to make violence too heavy to carry on into this peaceful space.

The Summer Art Festival is going to keep the Waterfall Mansion open to the public until late August, but I’ll certainly go back next July 23rd to listen to the Midsummer Musicale concert where violinist Christine Kwak will be playing a ten million dollars Stradivarius featuring pieces by Vivaldi and Tchaikovsky. That’s the kind of delight that makes this mansion a truly living space.

Exclusive pictures from the opening: