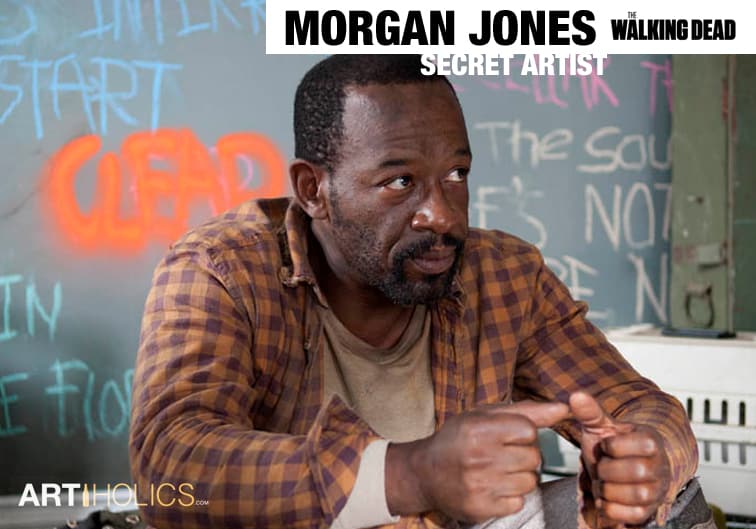 The newest episode of AMC’s The Walking Dead titled “Clear”  is now being heralded as possibly the second best episode next to the series pilot, and I can agree, it was amazing.  Not only for the full circle storyline of Rick and Carl visiting their home town and running into Morgan, the man who initially saved Rick and gave him the will to go on living, but finding Morgan living in a beautiful world of Art.

Is and has Morgan been a secret artist all along, or has the isolated world he’s been thrown into unlocked his true love of art, and his inner artistic potential?  The minute Rick, Michonne, and Carl step out of the car the screen begins to fill with a giant sculptural installation piece spanning a full town block.  From this point on in the episode there is rarely a shot that doesn’t have art somewhere on the screen.

Were you to find these sculptures installed in a Chelsea Gallery, they would fit right in without controversy.

The great use of type on the intersection broken up by the white lines, the three rows of abandoned cars, multi-colored arrows painted directly on the street leading in different directions, the various writings on tarps.  Ladders leading to strange windows color coded to match the arrows on the road.  An oddly placed blue door standing upright in the road leading to nowhere, this is brilliant.

Look at the detail of these punji stick sculptures.  Reminds me of Toothpick Explosion

Cages combined with bamboo with little living rats and birds in the core.  These sculptures have a living element, to compliment their killing element.

The tower with various ropes and pulleys  in the middle of the parking lot created to be able to traverse the road from above without being bitten, is not only functional but beautiful.  Morgan truly has a gift.

Honing his craft Morgan has opted to let a little of the Walker clothing and sinew remain on this one, it adds a tactility to it that it otherwise wouldn’t possess.  Stunning!

The Artist In Repose

“Let me give you a tour of my studio, actually, I will talk to you more about my work when I regain consciousness.”  The interior of the building is art on a whole other level.

Aside from all the great words of varying sizes and colors, erased, written over, crossed out etc, there is on one wall with an amazing birds eye line art drawing of map of the town, and the areas of the town that have been cleared, and the areas that are burnt out.  This map reminded me of a Loren Munk Painting.

Rick is in awe of the amazing written text.  It far surpasses graffiti, in that it’s methodical to the point of excess.

Being trapped in a prison so long, Carl thought he might never see the color blue next to orange in such a beautiful way.  The R being reversed adds to the illusion of the artistic fall from sanity.  The artist has obviously thrown his full self into his artwork.

Michonne, surrounded by art for the first time in years is reminded of her love of sculpture.

Her favorite work is of course Venus de milo.  I only assume this of course, because she is somewhat of a sculptor herself.  She sculpted two of her own out of zombies earlier in the series.

The artist and her work “Venus de zombros.”

Here Rick is thinking:  “His overlaying of words, his color choices.  It’s not what he wrote, but what he wrote over, or crossed out that really gives it power and meaning.”

As the artist wakes up Rick fervently asks him how much he would have to have for this work.  “I know removing a wall will be difficult, but you must understand, money is no object.”  Rick forgets that money actually is “no object” in a post zombie apocalypse, but for the past few episodes he has been following ghosts around, so you look past this.  The walls of the prison are too drab, and this is just the right thing that would bring some life back into the old place.   Rick tries to commission a drawing installation for just one cell block, but Morgan puts his foot down.

“Listen, I don’t work on commission mother f**ker.  I make this art for me.  I pour my soul into these words, don’t you GET THAT?!”

Rick decides the least he can do is interview the artist.  He asks him a series of questions that end up putting Morgan in an awkward situation.

It reminded me a lot of this scene from the movie Basquiat.

So the question you have to ask yourself is, is Morgan going crazy, or is he just ahead of his time?