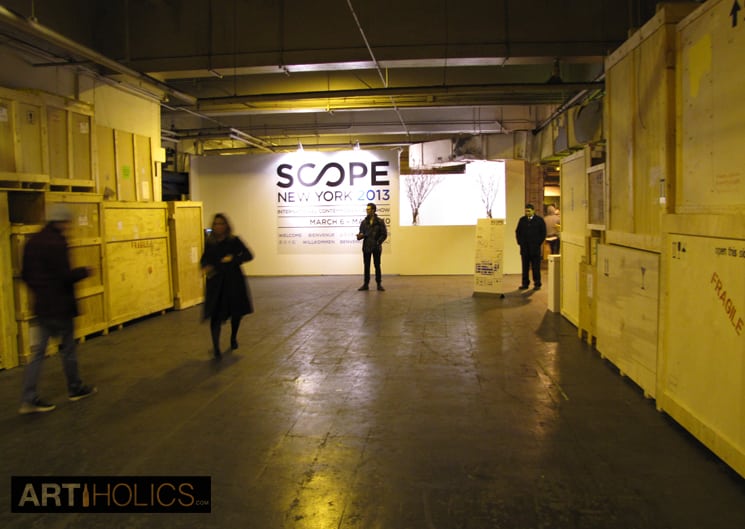 The Scope Art Fair has always been a good dowsing rod for what’s going to be hot and popular if not for the art world as a whole, at least it at all of the other art fairs this week.  I had fun roaming around Scope during the private press and VIP viewing.  Based on Scope here are 10 TRENDS you will likely be able to expect from the other fairs in the days to come.

I have a feeling assemblage will be the keyword of the 2013 Armory Week trends.  Other names I’ve come up with for this are Army of One.. One of many, The Big Picture.  The gist of an assemblage, as humans we have a instinctive ability to search for patterns and try to recognize a human face and facial features even in objects.  Throughout the history of human experience it has been important to recognize in real time the slightest facial movements and gesture and be able to respond accordingly with the appropriate reactions, we can blame the human eye + brain for this.   The eye will not only cheat reality to fill in the gaps, but also blur the obviously inhuman incongruities of oddly shaped items, or tiny uniform patterns, grids, or dot matrixes touching one another, or arranged next to or above one another, and visually merge them to see one image.

TREND NUMBER 2: Lincoln, the Dollar sign, and or The 5 Dollar bill

How could this be a trend?  Black President, and two Lincoln movies in the same year  that’s how.   Lincoln is part of the collective unconscious this year.  There were a few other Lincoln pieces I didn’t photograph at Scope because I didn’t think about the trend until I was already on my way out the door, but I can see the pattern.  Money is always a good topic, because it’s one of the only pieces of art we carry around in our pockets all the time, and even people who don’t collect art want to have more of those portraits.

Art using found objects which could be of no good use and “recycling them into art.”

Sounds a little out there for a trend, but I actually painted a sugar skull into a painting this year, and then I see about 4 of them at Scope.  The voodoo is in the air this year my friend.

TREND NUMBER 7: Art Which Appears To Be Melting

For some reason Jackson Pollock splatter is the end result of all this melt, let’s try to catch the paint in suspended animation before it hits the canvas!

TREND NUMBER 8: Art Made To Have The Illusion Of Depth – Using Mirrors

This art is amusing as it initially tricks your eye.  It is an optical illusion, more magic trick than art.  That box is only 3 feet deep, how come it looks as though it Is a mile deep.  Magic?  Or Art?

You can’t escape it, there is always a ton of it.