The Adoration Of Women: The Return of Michael Alan’s Living Installation 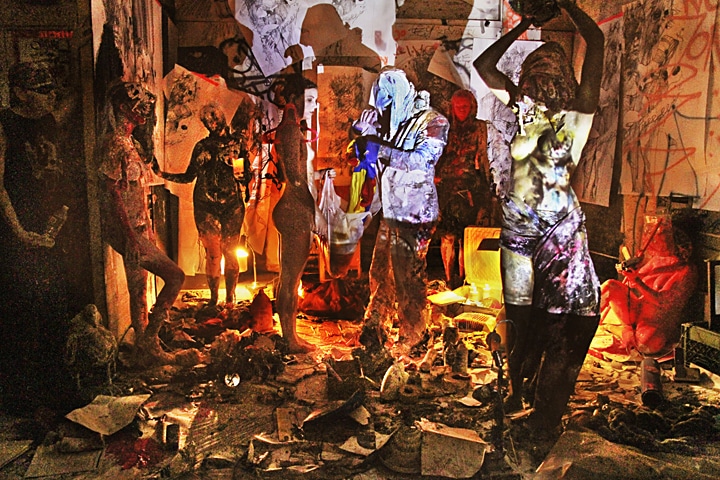 I arrived a few hours into an 8 hour living installation performance and the madness was already well underway. An amazing seat had been taped off with a “Reserved For Cojo” sign.  The second my ass hit metal I was catapulted front row center into an intoxicating juxtaposition of paint, garbage, and the odd beauty of the artistically distorted female form.

Ethereal music echoed, rose and fell as the faceless muses blindly repeated insignificant tasks with purpose. Ad nausium they wound up a rope, or painted and repainted their breasts with one hand while loosely shooting the action with a close-circuit camera linked to an HD flat screen sitting a few feet away.

The women start as clothed audience members, stripping nude as they walk towards the stage.  Their faces are quickly covered in some sort of mask.  The whole scene reminded me a bit of Picasso’s Les Demoiselles d’Avignon.

Once in the middle of everything one girl’s mask slipped off, and the odd flash of humanity it revealed was jarring.

I grabbed one photo (although you aren’t supposed to) with my camera to show the chaotic scene from where I was sitting.  I also wanted to make sure I got a shot of artist  Joseph Meloy, who was the official photographer of the event in action.

I caught up with Michael Alan a few days later to talk a bit about the show, and the drawings he’s working on for his upcoming performance at The New Museum.

Artiholics: “The last of your ‘living installations’ I went to was The Healing Show (read about it on ArtSucks), this one new one ‘The Adoration Of Women’ seemed a little less chaotic, can you talk a little bit about the different approaches you took with the two shows?”

“My drawing for The New Museum performance/live show! This is one of 4 drawings that will be picked for the card/ for the Untapped show at the Museum!” – Michael Alan

Michael Alan: “The installations, drawings, sculptures, music, and paintings are all connected with their language.  That being said, every work is standalone.  The healing show was extremely raw, chaotic and emotional. It was a few days after Sandy and that was the energy at the time.  We were extremely lucky we were able to make that production happen and it was wild! This experience, the adoration of women, was less chaotic and more attentive to what the performers and I wanted to express.

We wanted to highlight and deeply develop each character for the audience.  Each performer had their place on stage, forming a circle.  I was in the center of this ritual, so the piece was literally centered.”

Artiholics: “So this is the last of your live performances before the big show at The New Museum.  How crazy are you gonna get over there, seems like you would probably have to tone it down a bit.”

Michael Alan: “The word crazy is relative.  The New Museum untapped living installation is entitled ‘freedom’. The curators have given us the liberty to work in new collaborative opportunities (special thanks Rick Herron and Travis Chamberlain!).  This festival is outdoors for the public.  I’m work working with musicians I’ve never worked with before.  I’m using less paint and moving to different materials. I have decided to work with Rose Lou and Tim Love Lee verse my normal 8 to really push that collaboration to the extreme.

In addition to collaborative works I will be drawing 15 large, human sized works, and building miniature sculptures.This festival inspired us to be coming out with a 12 song album, of Tim and Mike songs!”

Artiholics: “I’m sure after seeing one of your performances, people picture your studio to be like that scene in the movie Frida where we see Diego Rivera’s studio and there are just nude female models hanging around 24×7 swinging on fabric swings.  How close is that to reality?”

Michael Alan: “This is the classic Hollywood fantasy, at the end the hero drives and crashes off a cliff. On a typical Monday, there is usually about 750 nude male and female aliens swimming in a #warm pool of legos while eating feathers, fishies, and bags of paper. On Tuesday, there is anywhere between 50-75 billion naked smurfs, ranging from 1,000 to 2,000 lbs each. On Wednesdays, there are 20,000 half monkey half raccoon hybrids clapping while they teach lizards and squirrels how to get along. Fridays are casual, I’m usually free basing. The rest of my schedule is really confusing.”

Pictured: Michael Alan.  (You only get one ride on this dirty fucking earth speck, so why not make it interesting).

Artiholics: “After the New Museum show, where and when can people who’ve never experienced a Michael Alan ‘Living Installation’ or seen your drawings and paintings expect to see you next?”

Michael Alan: “My work is with Gasser Grunert gallery, on 19th and 11th in Chelsea, New York. There is always work up, and a ton on request. I’m planning a huge installation in the beginning of the summer, and The Draw-A-Thon reunion, a studio show called “works on fire a bunch of group shows, my Record comes out! and possibly a solo show! Woop!” ~

You can view some of Michael Alan’s artwork, as well as keep tabs on his upcoming projects on his website: MichaelAlanArt.com