If The Earth Was A One Horse Town 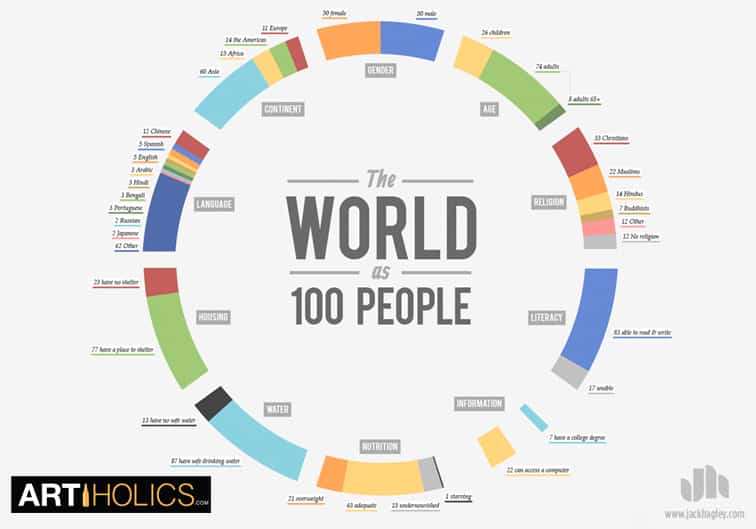 This week a viral infographic began doing the rounds (click above to view large- designed by Jack Hagley) which breaks the world’s population down to 100 people. These are staggering figures, and a real eye opener, and if you were online and had a fast enough internet connection seven years ago, you may remember the revolutionary video that first brought these figures to light on a viral scale.

Back in September 2006  The Miniature Earth Project asked the question via a YouTube video, what would the planet earth look like if you broke it down to one village of 100 people representing the world’s entire population?  This video was based on a published report on May 29, 1990 titled “State of the Village Report” written by Donella Meadows.

Earth seems for some reason to be a much harsher, rougher place when shown at the micro level.

It’s hard for most of our brains to grasp figures when they are in macro scale, and to relate to living conditions of people on other ends of the globe. What would Billions of people even look like? It’s a lot easier to imagine your self as part of a small community,  living in a small town, or on a suburban block of 100 people than one out of 7 billion.  The socioeconomic strata is more glaringly evident and defined in a smaller group when the differences and discrepancies are shockingly vast.

It’s also easier mentally to grasp how well you have it compared to the bulk of the planet, and see to see visually (in your mind’s eye) where you fit in.

Raw data is enough for some, but beyond figures and numbers, when you bring art and design into what would otherwise be economics and statistical spreadsheets, the numbers become faces.  The figures take shape and color.  The art and design give these facts shape.  They cast a wider net and  and speak to a broader audience.

In December 2011 TheDiversitySpeaker Created An Updated Version Based On The Original Using More Current Statistics And Covering A Broader Range Of Issues.

Considering this infographic is written in English, and only five percent speak English and 7 percent of the people would have internet access only about 5 – 7 people in the village would be able to read this post. Not to mention the percentage of people with bad vision, people too young to read or understand graphs and people who don’t have access to computers or know how to operate them enough to zoom in.

Some more statistics that might fuck with you.  Of the 7 people with internet access and the 12 people without internet access…ALL OF THEM would be on Facebook (there are 1 billion facebook members worldwide), and none of them would have any facebook friends or followers.

Humans are very visual animals.  We are lucky to be one of the few (if not only) creatures on earth who are able to analytically process data and crunch numbers, and most certainly the only species who can take raw written data and convert that into mental pictures, but when that conversion step is cut out and the visuals are already presented for us, it creates a more clean pipeline to an emotional response.

I’m an artist, not a scientist or statistician. These are the reactions of a visual human being reacting on visceral and aesthetic levels, so I could just be full of shit.