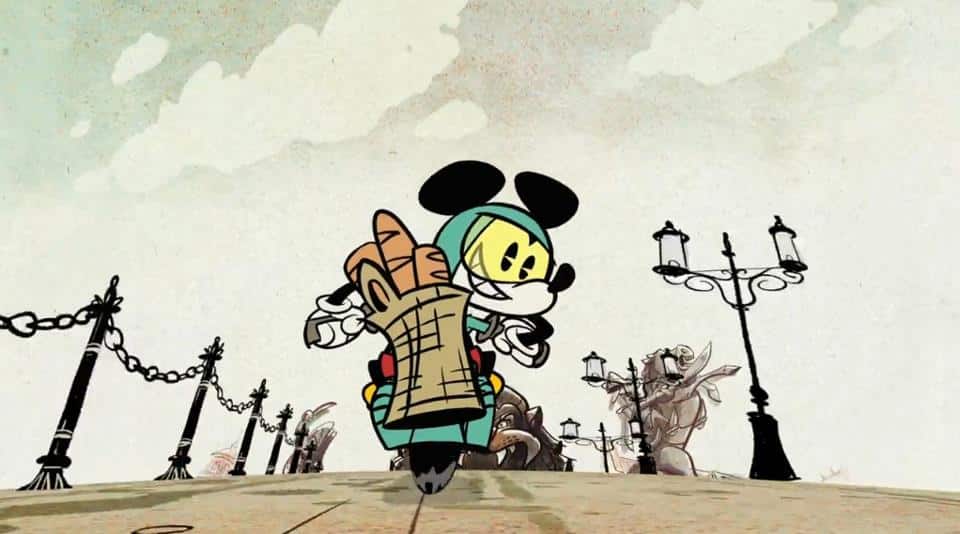 It’s rare that you see a decent Disney cartoon featuring Mickey Mouse that isn’t 50+ years-old (in fact Disney has only released three since 1980), but this newly released Mickey Mouse and Friends animated french short Croissant de Triomphe is pretty sweet, and unlike anything we’ve seen before in the Mickey canon.  It’s done in what looks like a cross between Flash Animation, Anime, Ren & Stimpy, and Babar.

The video is available to watch streaming on Disney’s Website Here.

(((SPOILERS))) In it a distressed Minnie Mouse is in a jam when her Parisian cafe runs out of Croissants.  She (in French mind you) puts a call out to Daisy Duck, who contacts Mickey and sends him on a “Mouse Hunt” for Croissants (which are apparently hard to find in Paris).

To make quick time he hops on an anthropomorphic Vespa, which is like the G rated version of Benny from Who Framed Roger Rabbit, and although it is small enough to navigate through traffic, he opts for scaling buildings and cathedrals, crashing through museums, and disrupting a few key scenes from a few of our favorite Disney fairy tales.

In the end our hero of course saves the day after a few close calls, and the customers are surprisingly happy to chow down on second hand stolen Croissants.  By second hand I mean taken from another person’s hand whom already paid for it and offering it for resale at retail, and by stolen I mean literally stolen from the hands of hungry children.  Children who were about to eat breakfast pastries while riding a carrousel by a human sized mouse in a custom fit suit of armor riding a sentient Italian moped with a baguette for a lance in a twisted game of “ring-spearing” .

Again, you can take my word for it, or watch video now on Disney’s Website.

They really went retro with thick line, flat color, and something closer to Mickey’s original eyes.  Here is a still frame gallery from The Art of Disney Animation’s Facebook.