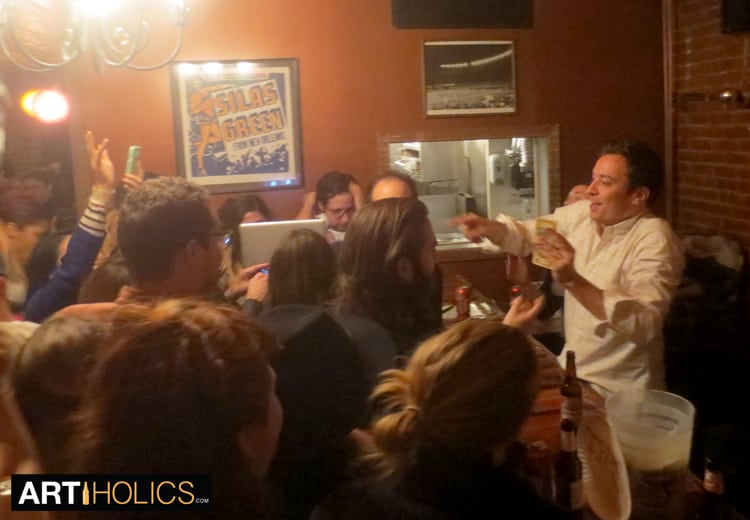 New York – Thursday, February 13, 2014
Lou Reed, Heaven above, Pie in the Sky. Pizza Underground below. It is true. They exist. I have found Macaulay Culkin‘s ever elusive folk band The Pizza Underground, a tribute to The Velvet Underground, at Two Boots Williamsburg‘s opening party as they played covers mashed with pizza themed lyrics.  Yes, it’s bananas.

On Wednesday, February 5th, Two Boots celebrated the opening of a new location in Williamsburg, Brooklyn (look out Roberta’s). Community leader and owner of the space Phil Hartman (no, not the late comedian) honored the legacy of Driggs Pizza with a star studded celebration in Brooklyn.

Pizza Underground entertained the crowd with their beatnik, too cool for school performance ensemble. Alongside with the band, Anchovy Warhol, their patron saint, a parody and homage to Andy Warhol, displayed his video art.

Why yes, that was  Jimmy Fallon, the soon to be host of The Tonight Show Starring Jimmy Fallon (Starting Feb 17,2014 on NBC), who happened to be bartending for Macaulay Culkin. Why wouldn’t it be? This is New York. Fallon sincerely entertained the crowd with his infectious high-spirited energy. After a hundred dollar bill tip, he cheered the patrons and lifted his fellow bartender friend into the air.

Questlove from The Roots,
DJ Max WoWch and DJ Jaclyn spun sets as party goers rubbed elbows with ?uest Love and former soap opera vixen Jordan Lane Price, among other celebrities hidden throughout the show. Brooklyn-based act, Maybe The Welders, a rock and roll band with an old timey hop sound, danced throughout the crowded back room. Dancer Zuzu Mrozek did a burlesque inspired piece during their set.

A Nicolina Art mural on the walls of the newest Two Boots.

Phil Hartman has long been a supporter of the arts, and a fan of the history of New York. Showing his love for cinema, Two Boots is known for their gourmet pies named after pop culture icons, such as Mr. Pink, Steve Buscemi’s character in the film Reservoir Dogs. For some time Hartman owned the now defunct Pioneer Theater, an underground venue screening art flicks and indie work. They hosted cult following screenings, such as Donnie Darko, along with a talk back with writer and director Richard Kelly. It was a great day to celebrate the arts and what makes New York so special.