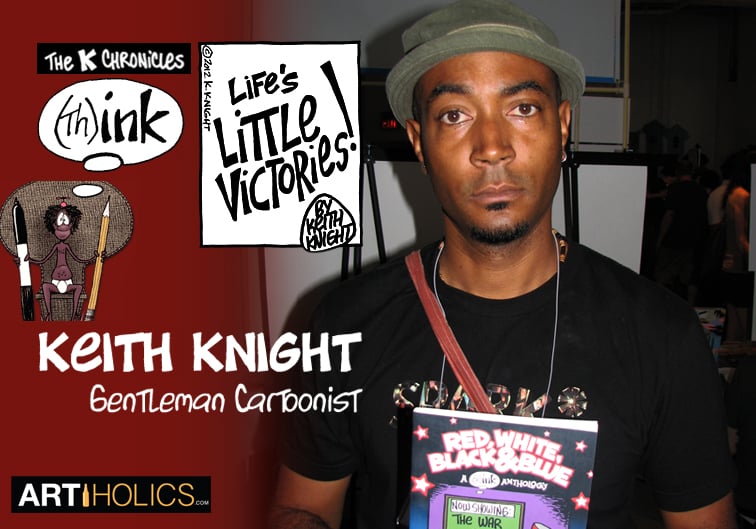 Tonight is your chance TO BE ON TELEVISION!!! (OK, not that glamorous, you will be in the audience)., California based Gentleman Caroonist Keith “Keef” Knight will be in NYC to be the guest tonight on FXX’s Totally Biased with W. Kamau Bell (AKA The Black Daily Show), and there are FREE TICKETS still available to my readers who are also fans of Keef , comics, or cartooning (or who just want to be in an audience of a TV show. This should be an interesting interview, as it’s not often comic strip artists get in the public spotlight. Just FOLLOW THIS LINK NOW to get on the list (or visit totallybiasedtix.com).

Keef is a syndicated alt cartoonist who’s strips The K Chronicles, (th)ink and Life’s Little Victories appear in cooler news papers across the country. I have been reading his stuff in The Funny Times for years. I got to meet Keef a few years back at Mocca Art Fest 2008 when we were both there to sign autographs. He’s very cool, and his strips are edgy, and deal a lot with race, politics, and real life issues.

If you can’t make it to the taping but want to see more of his work, visit KChronicles.com for his blog, new strips, and a catalog of his collected anthologies, prints, and original artwork for sale.

I spoke briefly with Keef and asked him to recommend me some of his favorite strips to throw into this article. Here are a few of Keef’s picks.

The episode will air tonight at 11PM on FXX