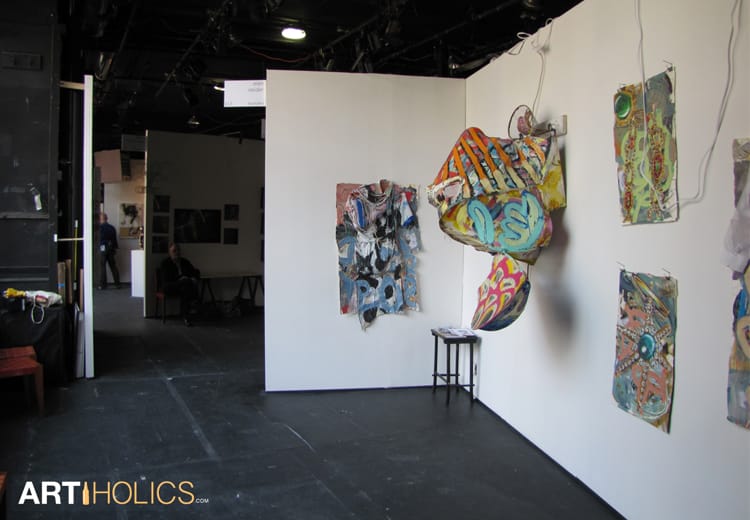 Cutlog is the first of the Frieze Week Art Fairs to open their doors to the press and VIP’s.  It’s hard to turn down an opportunity to check out the work before anyone else while being treated to a free gourmet brunch.  I can’t stress enough how much fun the perks of art writing can be, and recommend it to any artist who has a knack for words.

This morning the NY edition of the renowned Parisian art fair treated the press to a small talk with it’s founders Bruno Hadjad and NY Director, Guy Reziciner orchestrated by Lainya Magana in a small second floor theater.  It was followed by a brunch of Crepes and Champagne.

After brunch we were given full access to wander around Cutlog, to the 40+ exhibits featuring many first time galleries and curators, 80% of which are international.  Of all the booths 80% were only 80% hung.  This was truly a definition of a first look.

I found parking right out front, but the meter was only good for an hour, so after an hour I had to go out and feed it for another hour.  I felt a bit rushed in looking at the art, also knowing that they weren’t fully set up I didn’t want to get in the way of some booths, so in this article I  really have only documented about half the work in the fair.  If you hate spoilers, this article won’t ruin the show for you.

There are three theaters in the building which during the fair will have lots of scheduled live performances and presentations.

The building, The Clemente, is an old school house in the lower east side that has been converted into a community center, but unlike the schoolhouse that houses Spring/Break, this place is laid out in a weird way.  If you don’t pay attention to the map, you might get lost.

Look, there are some mirrors, how novel.

Artist Matthew Denton Burrows who is a recent SVA Masters grad, I recognized his work from the MFA senior thesis show last year.

Above are some photos by Serge.

A Bowl Of Mixed Art curator Frankie Velez in front of the Folioleaf booth.

PG Artventure has a great booth of Swoon‘s work.

There are many more Swoon pieces, you will have to come to see them yourself.

Family Affairs, an incestuous avant-garde survey of art group show within a fair by IFAC.

These paintings when viewed through this screen have secret three dimensional elements jump out of them.

The artist behind the 3D paintings, G.H. Hovagimyan

Rafael Fuchs in front of a lot of his work in the Fuchs Projects booth.

Matt Kinney himself standing in front of a few of his tools which are sculptures carved from wood.