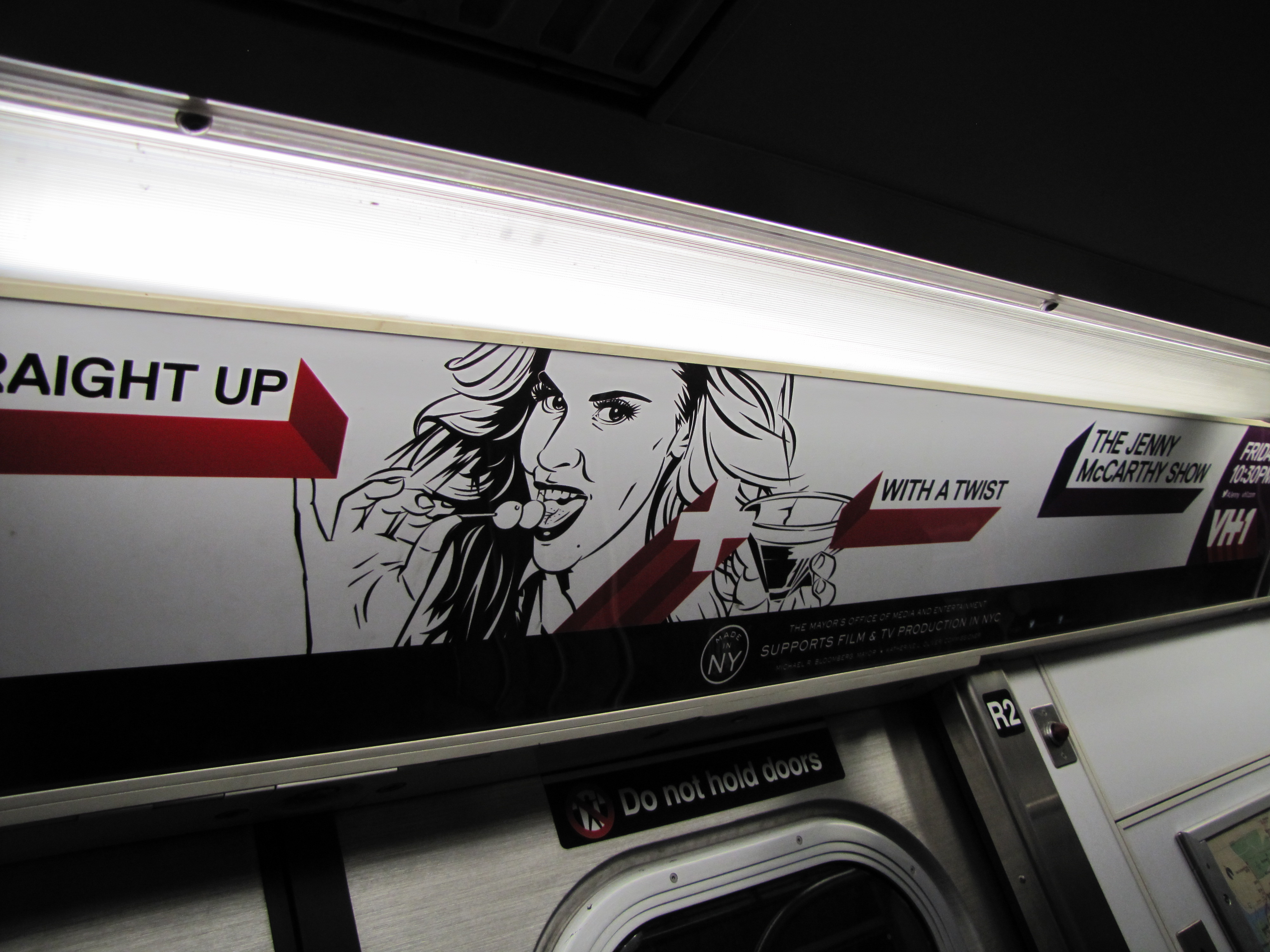 Making all attempts to beautify the subway with random MTA Arts For Transit projects, we are still constantly hit with gaping eyesores such as the ad above.  Sometimes I feel like I need to talk to major companies who pay good money, not only to hire an artist, but also to print art like this, and pay for subway car ad space   Apparently, according to the illustrator they commissioned to draw this hideous portrait, some old drag queen named Jenny McCarthy has a show, called The Jenny McCarthy Show on VH1.  “STRAIGHT UP…WITH A TWIST” (*the twist is, she has a DICK).

Seriously, when you are using reference for a woman who was Playboy Playmate of the year, you want to at least nail the face, not draw from some gross online gif

Take a tip from Andy Warhol guys, when you are drawing a classic beauty who isn’t 19 anymore, less is more.  This goes for drawing any woman. Like the song, you want to “Accentuate the positive” and “eliminate the negative”.

Emphasize the eyes and lips and blow out rest of the face a bit.  Every line counts when drawing a woman’s face.  Every line indicates years.  This artist went crazy with eye bags, a line under her lip, at least 8 other little cheek and eye lines and a severely hard line on her nose.

Look at the gif compared to the art, she has a straight jaw line in real life, yet for some reason the artist decided she wasn’t plump enough, must round out the jaw, add a little chubby chin on the end of that round jaw as well.  What the hell was he/she thinking?  And who approved this art?  Too many lines can ruin a beautiful woman’s face.

Not only that, they drew her with more roots than she actually has.  The drawing needs a dye job, this is something that in a drawing. . . YOU DON’T HAVE TO DRAW.  Also, if you notice, Jenny McCarthy has very shiny lips. not SOLID BLACK lips with a tiny white oval on the bottom lip.  She has sexy lips, you drew her like she put on lipstick with a black Sharpie.

Jenny McCarthy may have deep eye bags, and under eye wrinkles (in reality) but you wouldn’t know it from her press photos. This is because they are RETOUCHED.  As an artist, or commercial portrait artist to be more specific, you are obligated to do the retouching as you draw.

I understand that Jenny is known for being tongue and cheek while also being sexy, we all remember the famous Rolling Stone cover.

But this misses the mark.  It is less sexy, and more confusing, sad, and desperate.   Next time VH1, give me a call.  I rarely work in this style much anymore, but I have done it for a lot of big companies, and will still pull it out on special occasions.