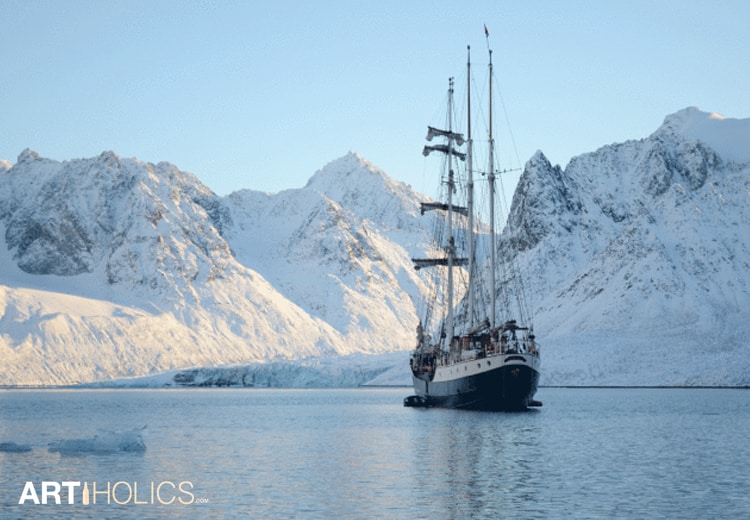 On Saturday Artiholics caught up with New York-based artist, Vanessa Albury one day before she embarked on a journey to the Acrtic Circle.  She is a member of the 2014 Arctic Circle Residency Program, an initiative that sends artists, writers, scientists, educators, and a variety of researchers to the Arctic Circle, together.

The program seeks to create collaborations among people of different disciplines while engaging in key issues of the Arctic environment. In the best scenarios on the trip, research and different insights will spark even more idea work, while contesting views and challenges are expected and welcome too.

Simultaneously, the experience of living and working on an arctic expedition research vessel, amongst magnificent glaciers, deeply cold weather, and the summer solstice provides a matchless experience to bind the residents.

She spoke to us from Svalbard, Norway on the work it took to get into the residency, her planned projects for the trip, expectations, difficulties, and stories of problem solving.

Artiholics:  How are you feeling these days? It sounds like you just left a big project and are now going in to an even bigger one.

Vanessa Albury: It’s exciting.  It’s nice to have this time to focus on my work.  This is the kind of work that I want to be doing with my time. At the same time, it’s a lot of work.

Artiholics:  How long have you been working to get into this program? Can you tell us about the different parts for applying and preparing?

Vanessa Albury:  I first applied to this residency 3 years ago, to go on the 2012 expedition. I got rejected the first year, then rejected the second year in 2013, and accepted in 2014.  I found about the program 5 or 6 years ago, so this has been on my radar. While applying, you have to develop a project that ties in to the environment of the Arctic.

I applied to 6 different grants from the United States, but I won’t hear back from any of them until the expedition is over.  So, the Kickstarter was essential. I also invested some of my own money into this.

I’ve seen other artists work on this.  It seems like the type of thing that you do once in a while. You probably won’t rely on this for a long time?

Yeah, no, you have to use it for something special, something that people will get something out of contributing to it.  Not a statement,

I thought you made good use of the internet for one of those rewards.  You broadcasted your supporters through your website.  And you’re going to bring back things for people, photographs?

I didn’t know that.  That sounds awful.

When I pressed the green “Launch” button, I went into a panic and thought, Oh my Gosh, what am I doing?  But then I found that a lot of people care about this and they care about me.

I sent group emails to some of my contacts, and then about 150 personal emails.  So 67 people contributed and that’s about 60% of the people I reached out to. They all came back and donated.  So if I were to advise someone on starting a Kickstarter, I would advise them to personally reach out to people and talk to them frequently.

[ Vanessa’s Kickstarter Campaign raised $4,886.  Originally, she set a goal of $4,700. Some of Vanessa’s incentives to donors include sending back prints, or documentation of personal messages written in the snowy Arctic landscape.]

Also, there was a lot of prep for clothing, and prepping gear – how am going to prepare for these photo based projects?  I’m not just bringing pencils.  I’m also creating a dark room on the ship and bringing projectors.

There seem to be a lot of logistical issues. Even admin work for a trip amounts to a lot.  I mean, we’re artists, but we’re also project managers.

Yes. That true. Not only project managers, we’re the creative problem solver.  Your issues involve these services companies and customer service. They don’t know how to solve the issue.  So, you just transfer and transfer until you get to the executive level and then they begin to help you.  And it still takes them hours and hours to figure out.

(laugh) I’m going to remember that.

And the other good one I learned – Ask for the executive branch.  They make shit happen.  The conversation that would take hours with the customer service level, takes ten minutes with the executive level.  Here in Norway, I learned that the customer service tends to say no.; and then you just keep asking and eventually they say yes.  You just have to keep on talking to them like they are people.

I definitely like that advice … Let’s talk about the visual part of your work on this residency. I’m curious about the mediums and how you’re thinking about the pieces.

Sure, there’s two projects. One involves 4 x 5” pictures made by a 50 mm pinhole camera. I’m going to be observing what light does up here, the light play, and the how light works on the surfaces that exist up here.

There will be gelatin silver prints, fiber prints and the other project is based on a 50 mm film based, which is more involved.  I like to have more than one project going on at any given moment so that I can bounce between them.  So one that is kind of easy. The pin hole camera is not so involved.  I’ll be taking a 50 mm projector onto a boat, to project onto a glacier. And powering it with a battery.  On these glaciers, I’ll project films I shot while filming deteriorating buildings in Germany.

In my mind I’m thinking about a recent report from NASA on the unstoppable melting of the ice caps and I am trying to created a parallel space in my mind with deteriorating buildings and ruins, where the building is no longer usable but it’s still standing and has a space in the world.  The glaciers become future ruins.  So I’m projecting these building images onto the glaciers and then documenting that process.

I see. Those elements feel fitting for what you’re trying to connote.

We’re in the midnight sun right now and I’ll be competing with that situation,  seeking out caves and darker areas. At the same time, you don’t get so tired.
Oh man, really?

It’s kind of bizarre.  It’s been midnight sun since May, and I’ve been up here since April 8th.  I find that I don’t get tired so much, and I might not know what time it is.  You sleep less, and experience some manic feeling … (laughs) You get a little loopy sometimes.

(laughs) But at least everyone around you is feeling the same thing, so you can be manic together.

Yes, we’re all in the same boat …  I should mention, I’m also bringing my Holga camera, shooting some 120 film and dunking my camera under water, in a plastic bag, but that’s my version of a waterproof camera.

That’s a beautiful camera to use.

I love Holga.  It’s my favorite.

I also want to ask you about the nature of image projection (from a description of Vanessa’s work on her Kickstarter).  It sounds like it has a really cool history.

I enter that conversation through stills and the projection of stills, and dissatisfaction I found involving this conflict between images and object. People don’t think about photographs as objects they think about them as 2-D images. They think of them as windows into the world, but they are actually objects.

So I started projecting images, in my thesis show (for Graduate school at NYU).  I wanted to take the image out of a permanent place. Some of my ideas come from wanting to pull images out of space and time, so that it isn’t stagnant, it’s interpreted that way [as stagnant,] and I wanted to mess with that.

I only recently came across this idea while writing about Polaroids.

That’s an interesting space, and I live with it all the time.

So, the installations that I’ve created, they come from wanting to expand a moment, or a still into an experience or series of moments, even the video works become like that too, or looped.

I’m curious about the final project of the residency.

Yeah, I plan to do a public talk and an exhibition. Another curator invited me to show work on a performance night.  Was thinking about a film-based performance on some of my work here. We’ll be shooting some 16mm footage.  I have not figured it out exactly yet.

It sounds like that will be ok, because you’re going to be meeting all these other people, and maybe something will come about, something you’re not expecting.

Yeah, you have to be able to experiment.  I’ve been inviting happy accidents into my practice.  I like to set up projects with some looseness so that those kinds of things can come.  But I do envision screenable film, some stills, photographic prints, and installations.

Do you know anyone in that program or are you all going to meet when you begin the trip?

That’s right, at the Meet and Greet.

There were about 20 people, writers, two science researchers, an architect …
Aaron O’Connor who runs the program.  He also makes work, but he doesn’t do it while he’s on the boat.  It’s a little overwhelming because every one is so interesting and there’s no time to meet everyone at the same time. They have really good projects going on.

Yeah, I’m sure you’ll get a chance to really get to know everyone when you set sail together.

At the end of the program, Artiholics will catch up with Vanessa Albury  when she returns for a follow up article on her adventures in the Arctic Circle.

Vanessa Albury lives and works in New York City, where she also received her MBA from New York University.   Her practice explores analog materials and devices, international curatorial work, and writing for publications such as Art Pulse and Huffington Post.  In late May, Vanessa completed a residency at Kunstkvarteret in Stamsund, Lofoten, Norway.   The Summer Solstice Expedition of the Arctic Circle Residency Program has commenced and will end on July 1st.

Editor’s Note:  BE SURE TO READ OUR EXCLUSIVE FOLLOW-UP STORY PUBLISHED September 4, 2014