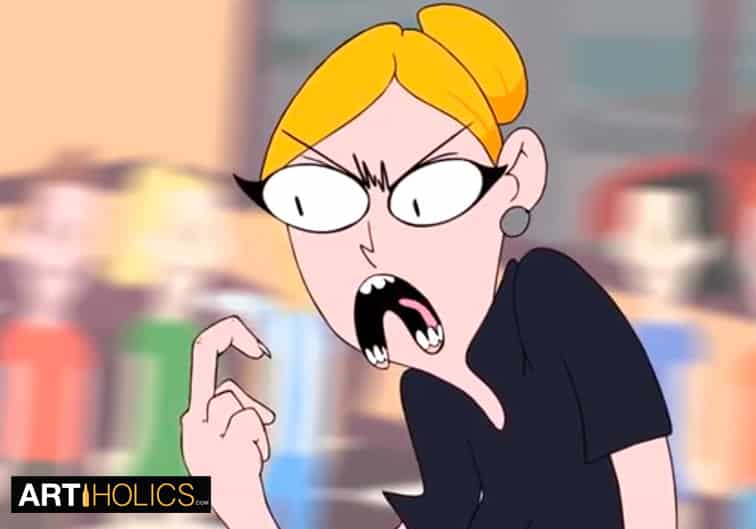 I got sucked into the depths of the web last night when I watched this cartoon animating a portion of the season finale of Gordon Ramsay’s Kitchen Nightmares.

This animation was done by Jaxamoto.

The full episode (above) featured Amy’s Baking company and is a must watch.

After seeing that I got into watching all of the news coverage and the facebook posting war, and yelp battles that came next.

This took me into first steps of an all night cleaning session where I sorted and reorganized my studio while watching the first season of the American version of Kitchen Nightmares on Netflix Streaming.

I have learned a few design and culinary tips by mainlining an entire season of Kitchen Nightmares back to back on the internet.  TAKE NOTE:  if your restaurant is failing and you were thinking of trying to get a 15 Michelin star chef to come hang out for a week and yell at you but the waiting list is too long, here are a few tips I can give you just based on what I have seen on the TV.

The first is that your food sucks.  If Ramsay was there he would never like any of your food, most likely comparing it to a turd, having no taste, or he will actually leave your restaurant to vomit.  This is because you use shit ingredients, frozen food, processed food, and don’t know how to either cook at the right temperature, or plate a dish to look presentable.

The second is that when Ramsay fixes your restaurant the main thing his design team will do is paint the walls in warm yellow / gold hues, throw in a few big comfy couches, put fresh flowers all over your restaurant, and put candles on every table.  Your restaurant most likely will be compared to a tomb, or a grandma’s house.  You need to modernize it and make it more warm and inviting.  If the building is historic, or the restaurant you own is old or a legacy, and you have a few tasteful antique photos of either the building in earlier days, or photos of the restaurant in a different time period, Ramsay will frame these and put them near the door so guests will be able to enjoy them while they wait to be seated.

Do you have a shitty sign, a sign from a different era, or a sign that doesn’t mention that you are a restaurant?  Maybe no sign at all?  Invest some real money in an actual sign made of cut wood or rock.  It shows permanence.

As for the food, replace all of your frozen and processed food with fresh local food and fresh ingredients.  Use veggies that are seasonal, and change the menu according to the season.

At the end of the episodes there would usually be a few lines of type mentioning how successful the restaurant had become 2 or 5 months after the taping as a follow up.  Being that the first season was shot in 2007, it’s interesting to see this show back-to-back as I was able to google the name of the store and the words Kitchen Nightmares after every episode to see what became of them five years later.

This was actually kind of sad.  About 90% of the restaurants went out of business, were sold, or the head chef had a heart attack, drug overdose, or committed suicide (that one was depressing).