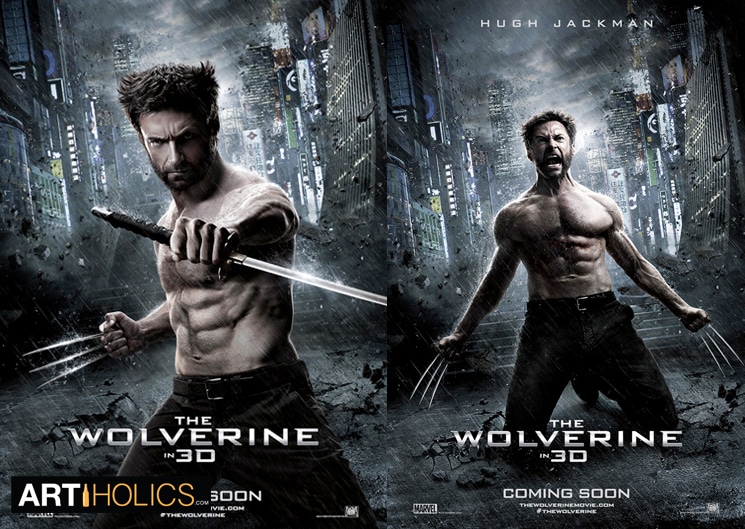 On Wednesday Marvel released the trailer for “THE WOLVERINE”, the new Hugh Jackman, Marvel Comics movie which takes place in Tokyo, Japan and hopefully doesn’t get leaked to the web before the special effects are finished like the last one.

According to the newly released posters, Wolverine is pissed off in the rain, shirtless , and has a katana.  Wolverine carrying a katana is sort of like having a bazooka with a sling shot attached to the side (what’s the fucking point).  Wolverine went to Japan to kick ass and eat sashimi…and he’s all out of sashimi.

I don’t care if that’s a Hattori Hanzo sword, if it isn’t made out of adamantium, it is like carrying a large butter knife when you already have six built-in machetes.

Oh, a bunch of Ninjas?  Are your swords made out of adamantium, no?  Well then they are about to be cut in half like a chainsaw though balsa wood.

Wolverine went to Japan to kick ass and eat sashimi…and he’s all out of sashimi.

Anyway, from the trailer it looks like Wolverine loses his Mutant Healing Factor in Japan, sort of like how Superman lost his powers in that one movie for a while, or like how Spider-man lost his abilities in that one movie for a while.  I am sure that this will be a permanent condition this time though, because that’s how everybody loves to see their favorite superheroes, weak and feeble.

Can I just bring up the fact once again, that Wolverine looks badass in his mask / cowl, and has worn it ZERO times in the X-Men or Wolverine films, but wears it ALL THE TIME in the comic books.

I even did a quick mock-up of how it would look on Jackman back in 2005 when they put out the original X-Men costume.

That looks really shitty, but you get the idea.