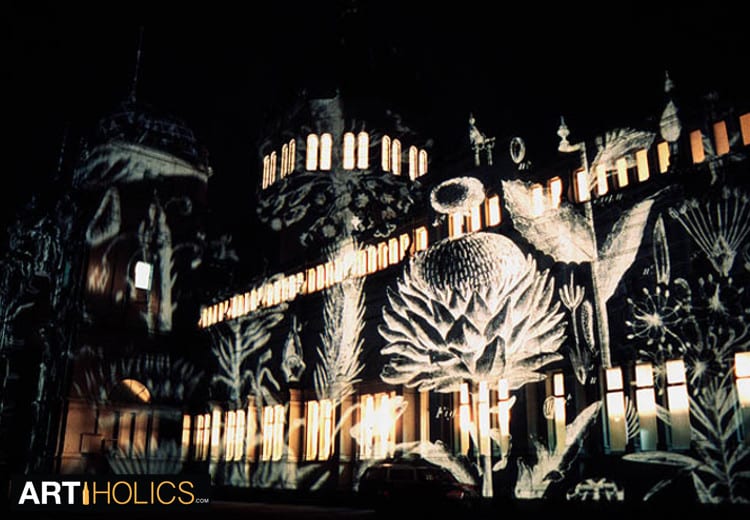 They are called Urban Projections, a collective of Multimedia Experimentalists, based in the Midlands, U.K.  From lo-tech pieces of string and cardboard to the latest audio-visual applications and hardware; they specialize in combining hands-on creative activities with cutting edge multimedia application, to deliver eye-catching, illuminating, mixed media products.

Projections have the ability to take city facades, and turn them into a movie screen. They love to take their work to the streets, calling it street art or guerrilla projections, it’s one of the most effective and immediate ways of reaching audiences and catching them by surprise, without leaving the permanency of spray paint. Essentially, they can create a temporary mural that actually moves.

Urban Projections have numerous mobile projection units including bikes and wheel-able devices which have been specially converted to create the ultimate, self-sufficient projection mobiles.

The power of projection is in the simplicity of its medium, and when using the street as a canvas, the possibilities are endless.

It could be the simplicity of a slogan, a living moving mural, digitally drawn by a graffiti artist or the interactivity of social networking feeds – There are limitless possibilities to how you can reach your audience, and how they can feedback to you.

Projection Mapping is a recent development in projection technology, in which an image can be specifically ‘placed’ onto the features and contours of an object.  Paired with careful pre-production, it is possible to achieve stunning results.

At Urban Projections, they been on the forefront of the video mapping scene. From small scale stage set, to 8-storey tower block, they have used projection mapping to develop eye-popping mixed media performances, that seemingly push the realms of possibility.

Often when groups like this merge audio and visual technology, the viewer’s senses are synched up; they see what they hear, and they hear what they see, much like in the following video. The rhythm of a song matches the changes in image frames.

When audiences go to a music show, they are now expecting to see visuals to assist the experience of the sound. Some people are more tuned into their visuals than their audio senses, and groups such as Urban Projections is accommodating to this shift towards a a more advanced visual culture. Project mapping and new projection technology may revolutionize the art world, and the visual world of urban centers. Music scenes are changing for the better to create a multi-sensory experience, and our apathy towards culture will be left behind, as we brace for new engaging media to engulf us in its presence.

When I asked the creative director, Rebecca Smith, about her project, she responded with the following information:

A bit of Background
Urban projections is run by myself (Rebecca Smith).  My background is actually in audio production.  I began work when i was a teenager (I’m now 32) in recording studios as a sound engineer, and progressed into electronic music production.

I always had a strong passion for contemporary / visual arts, and would tinker with all forms of graphic design, contemporary art etc when i was young.  I toured for a while as a turntablist (scratch DJ) in early 2000…. there seemed a natural progression with the way that technology was moving to start to incorporate audio and visual forms together.As time moved on, the edges of art forms kind of melted away, and they all seemed to merge into one…. video, animation, 3d design, projection, sound, live performance….. whatever.

If you have the fundamental skills and an eye, then they are all just tools for expression.My actual education is in audio engineering which i have a BSc Hons, though to be honest, audio production is probably the least used skill in my day to day work.

I collaborate with all different artists and bring them in on a project-to-project basis, dependent on what type of skill set is needed for the project, and the direction that we are interested in moving in.

Where does inspiration come from for our work?

Quite often, its from other artists that i meet, and then collaborate with….. I’ll see someones work, and then get a spark of inspiration for how it might collaborate into a new media piece.  For example, I’m currently doing a series of work with modern mural painter and graffiti artist Peter Barber.  His work is very organic and hand made….

>We are working on ways to incorporate projection mapping techniques with hand painted image.  We’ve termed it the ‘living mural’ and have created a series of work called Stylus.  Our next piece is out in the forest.  We’re also working on some really huge scale works which are incredibly exciting, and will involve a whole new expansion of our creative team.

I also get massive inspiration from the streets themselves.  Sometimes i see an interesting space and just want to create something especially to fit in it.  I love to be able to surprise people and just make them break from the ordinary, just for a second, and experience something different.  That’s why we built the light cycle, so that we could hop out onto the street and take our art into unexpected places.

Whats our process?
Usually a piece will take several weeks to come to fruition.  I tend to bounce inspiration drawings, pictures, colour palettes etc to whoever I’m collaborating with.  We work up scaled-down versions to check that something is going to work, and practice projecting the piece.

It’s important to test things out, as they can look very different projected, to how they look on a screen.  Quite often we throw a lot of material and ideas away.  I think that’s a really valuable process, and I’ve learned not to be too precious with things that we make or think up.

Half of the creative process is throwing stuff out and sifting the important elements that should stay.