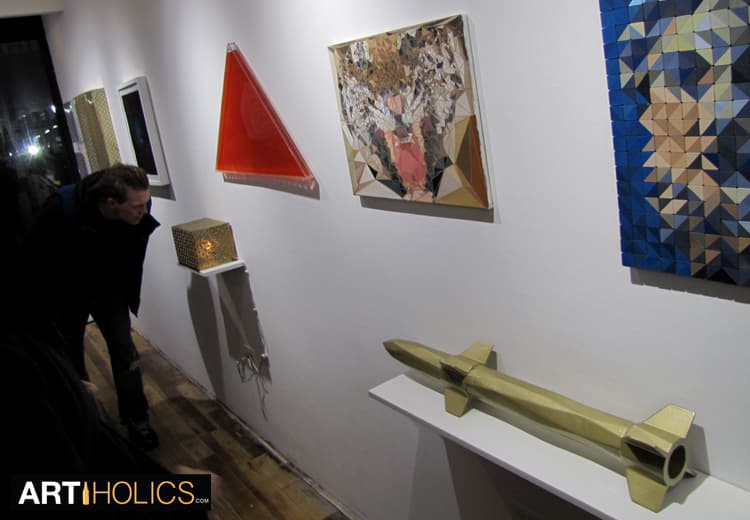 One of the only Manhattan art collectives, Con Artist Collective, has currently on exhibit a trio of artists who’s work pushes the humble triangle to it’s extremes.

Brandon Wisecarver, Patrick Grzelewski, and Jamie Martinez, the three artists in the show.

These artists borrow the visual form of the triangle and its wealth of symbolic meaning. Their collaboration is in and of itself a triangle; a union of three creative points of reference focusing on the same symbolic center.

When invited to an art opening revolving around the triangle, the first place my mind jumped to was that scene in Art School Confidential where Malkovich talks about his evolution into triangle paintings.

Having already seen Jamie’s Tiger made from triangles at the Clio Art Fair, I had an idea that seeing an entire show of his work wouldn’t disappoint.

Like the Tiger, when seen though a camera view finder, or through a phone, these images are more easily distinguishable as paintings of ancient sculptures heads.  They are hand painted on hundreds of tiny squares broken into triangles, somewhat of a triangle pixelation, tricking your eye using the same principals of a Chuck Close portrait.  One of these two sold early on.

An x-ray with triangles stitched into it.

Jamie made this 3D printed missile.

Jamie and a bunch of the Artefuse contributors.

Artist Patrick Grzelewski and his collages.

In the back of the room is a small wooden room installation by Brandon Wisecarver.  When you enter it and close the door you see a black light and laser light show of glowing triangles.