Pokemon fusion strike introduced a lot of great cards to the Pokemon TCG, especially the Mew and Gengar cards were received very well by the fans. Apart from that, the fusion strike expansion was also the last one for the year 2021, and the last one from the current TCG standards, the next expansion, i.e. Pokemon Brilliant stars will be introducing the concept of V STAR cards into the TCG.

But today we will be focusing on the smirky Inteleon from Fusion strike which has recently seen quite a surge in popularity and hence an increase in its asking value as well, so let’s take a look at this card and decipher what all the fuss is about. 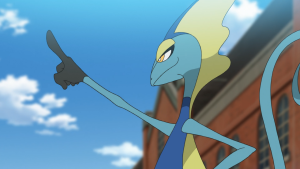 The sad little sobble grows up into this confident and sneer Inteleon which is known for its decisive strategies that win battles. Inteleon is, by all means, an evolution of sobble, it gains a ton of confidence and becomes a better version of itself because of which many Poke fans have taken a liking to it.

Inteleon has a ton of great capabilities, like a knife in its tail and yellow membranes on its back which are used to glide. And if that wasn’t enough, Inteleon can literally shoot water at the speed of Mach 3, which is 3 times the speed of sound!

The beautiful Inteleon VMAX has been illustrated by the super talented Kuzama Koda who is fairly new to the TCG it seems. The Inteleon in its gigantamax form finds an accurate depiction in the cards as the Inteleon can be seen snipping using its super-fast water attacks from the top of its tail.

Kuzama Koda has been involved in creating a lot of great cards in the TCG, some of which are the Galarian Moltres from evolving skies and the Lapras from sword and shield both of which are very unique.

Kuzama tends to make their cards dramatic in nature as you can see a detailed background which plays a role in the theme of the card.

As of writing this blog post, the price of this card is anywhere between $50-110 depending upon the site you’re looking upon or the condition of the card. The price was not this high since the release, but it has started to increase in recent weeks.

As the card is pretty coveted at the moment, the prices are booming, as more and more Inteleon VMAX get found, the prices will keep going down.