The Ultra Rare Inteleon VMAX is a part of the Pokemon fusion strike expansion!

Pokemon Fusion Strike was the last of the TCG for the year 2021, and it was amazing, to say the least, bidding farewell to what was a great year for the TCG in general. 2021 gave great chase cards, especially in Pokemon evolving skies, and fusion strike.

Though fusion strike put more emphasis on the Mew and Gengar cards this time around by including them heavily in the promotion of the expansion, some other cards also stole the show. Like the Inteleon VMAX for example, the card has been doing great numbers ever since its release and might continue to do so in the future as well.

So today we will be taking a look at the Ultra Rare Inteleon VMAX, and get into the nitty-gritty of the card to understand why is it worth the money it is demanding, and also speculate the future of the card! 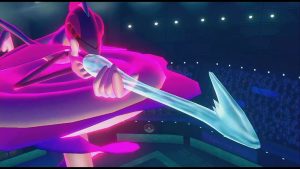 Inteleon as you know was first introduced in the latest Pokemon games, i.e. Pokemon Sword and Shield, and instantly it became one of the most loved starters for its personality. Inteleon wasn’t always confident and sneer character it is today, the Pokemon it evolved from, i.e. sobble was known to be sad and depressed all the time.

Inteleon has a lot of amazing and unique features, like the sharp knife on its tail, the yellow membranes on its back that allow it to glide gloriously into the sky and how can I forget the finger water guns, which are capable of shooting water at the speed of MACH 3, that is as fast as fighter jets!

The Ultra Rare Inteleon VMAX features the Inteleon in its gigantamax form which is a departure from its base form. Inteleon grows a huge tail, 130 feet in height, and it rests on the tails which resembles a pillar once it grows huge. Inteleon then proceeds to snipe using its water fingers!

Pokemon fusion strike has been the best expansion for Inteleon so far, it had three Inteleon cards in it, all three of which are very valuable today.

The cards illustration has been done by the talented 5ban Graphics, the illustrator has been known to deliver great artwork every time, and we have covered their cards extensively on this page.

The Inteleon as you can see is in gignatamx form preparing to shoot some water on its foes. The artist has decided to not create a background for this card the only thing we see is a black void with some colorful effects which only enhances the Inteleons expressions and pose in the card.

The illustrator will also be responsible for the brand V star cards from the upcoming Pokemon Brilliant Stars!

The Inteleon VMAX is being sold for anywhere between $10-50 depending upon the site you visit and the condition of the card, but you’ll most probably find the card for under
$10. That being said, as the card has seen a massive decrease in price we might see the trend continue as more and more of these cards flock to the market.