Pokemon Fusion Strike put a lot of emphasis on cards that had color palettes similar to pink, hence we see a lot of Gengar, Mew, Espeon, Inteleon, and Genesect cards in the expansion. Fusion strike is the expansion that bid farewell to the year 2021, and it managed to do this in a great way by giving some of the best cards for the year.

So today we will deep dive into the Ultra Rare Genesect V Alternate Full Art’s lore, the theme it follows, some trivia about it, and most importantly its current and future value. 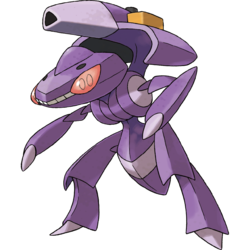 Genesect looks very different from the other pokemon in the Pokeverse; first and foremost, it looks more like a robot than  Pokemon, and you’d be correct to think so. Team Plasma revived a Pokemon from a fossil and created the Genesect that you see above.

Genesect is a bug/steel type Pokemon that has cannons on its back which can be used in four different modes! Genesect can also fly by reverting into a flying saucer-like shape which in Japanese is known as high-speed flight configuration!

Later on, N stopped this experiment to create Geneseact as he believed that Pokemon should stay the way they are.

Genesect is the only known Pokemon to be able to use the move Techno Blast.

On the Ultra Rare Genesect V Alternate Full Art, we can see Genesect breakdancing, doing a hand spin with Smeargle being its hype man cheering it up in the background. With this card, Pokemon continues to give us unique alternate art/full art cards which are different from the base versions, and honestly, more fun.

The Genesect V has been illustrated by the super talented Akira Komayama who have been churning out great Pokemon cards for a while now. Some of their most recognized Pokemon are the latest Zapdos V from Pokemon chilling reign and Blastoise and Piplup GX from Pokemon Cosmic Eclipse.

As you can see, their style is very cartoonish, similar to something that you’d see in the Pokemon anime or movies. This makes their cards stand out in the vast amount of TCG cards.

The Ultra Rare Genesect V Alternate Full Art has been created to be a more fun version of the Genesect V Full Art, and this shows in the colors used and the addition of smeargle in the background. I mean how many times do you see a Genesect break some moves?

As of writing this article, the Genesect V is going for anywhere between $ 50-80 depending upon the card’s condition and the site you’re looking on. But you can get a hold of this card for cheaper if you manage to meet someone near you.

Apart from that, as it is an alternate full art, it has more value than the normal version, so it might see an increase in value as the fusion strike’s supply reduces.