Fusion strike was from the start marketed as an expansion heavily focused on pokemon that have a color palette similar to Mew or Gengar, simply put, some shade of the color pink. Espeon is one such Pokemon, and hence, got a very special treatment in the expansion in the form of this lovely Alternate art card!

Saying this espeon card is beautiful, would be an understatement to its worth and its collectibility and most importantly its value in the market right now.

So today we’ll get into the nitty-gritty of the Secret Rare Espeon VMAX Alternate art, and understand what was the illustrator’s motive beyond the design of the card, the current value, and much more! 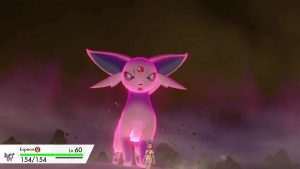 Before we understand what the card is we need to shed some light on the Pokemon that is on the card, which in this case is the Dynamax form. The Pokemon is enlarged and can take on enemies with even more force than it was able to do before.

Espeon is often considered as the polar opposite of Umbreon which is a dark type, as opposed to the psychic typing of espeon. Th Pokemon is also associated with magic and fantasy in the Pokemon universe.

Unlike the Mews and Gengars, Espeon only got one single card in this expansion, which is the cars we’re currently discussing. The card features a Dynamax Espeon, who is chilling on a medieval house.

The card has been illustrated by the talented Kouki Saitou who is known for their great artworks, and an artist that we have extensively covered in many of our blog posts, read about some of their cards over here.

Kouki Saitou has created the perfect depiction of this magical Eeveelution, espeon is often associated with magical and mythical stuff as we know. In this artwork, the illustrator took this to heart and created an Espeon chilling over what seems like a medieval house which is very reminiscent of a building that we may see in fantasy settings.

Apart from the Dynamax Espeon which is napping like a feline in the card, there also are a ton of wingull just circling this giant pokemon, and there also are some sort of pink beams going off back in the background.

Kouki Saitou really put in a lot of effort in this piece and it shows. Some of the other great artworks from Kouki Saitou include this magnificent Galarian Articuno V from Vmax climax!