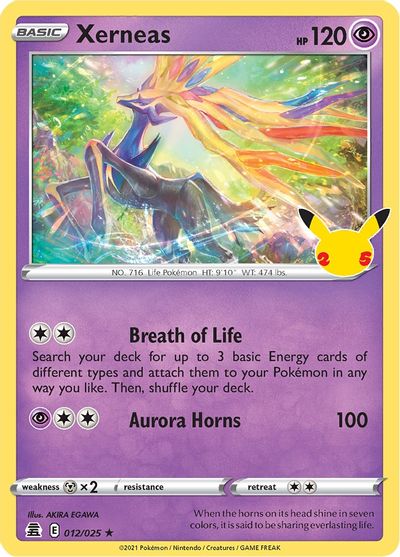 The beautifully illustrated Holo Rare Xerneas is a part of the 25th-anniversary celebrations set!

Xerneas was the mascot of the 6th generation of Pokemon; some even go as far as to say that it is the face of the Fairy-type Pokemon in the Pokemon universe. The addition of the fairy type was mainly to counter-balance the dragon and dark varieties, which were getting powerful.

The Xerneas Holo Rare card is one of the many great cards from the 25th-anniversary celebrations set from Pokemon this year. The celebration set cards are in demand these days as many collectors want to complete their collection.

If you’re one such collector who is thinking of buying the Xerneas card or is curious about the card, you’ve come to the right place. This article will inform you about all the aspects of the card that make it collectible.

As many of you may already know, Xerneas is the box art legendary of the Pokemon 6th generation games. It is also a part of the Aura Trio, which has Zygarde and Yveltal in it. Xerneas resembles a stag and has horns that resemble the roots of a tree. These antlers also glow in every color from the spectrum and turn cyan when Xerneas isn’t active.

Xerneas also has spots on its back which glow when it’s in battle. Many locals believe that Xerneas can share eternal life as it is immortal! 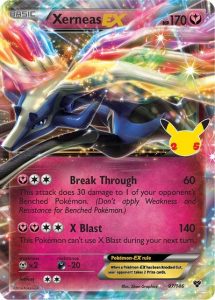 There is yet another Xerneas card in the Celebrations set, the Xerneas EX!

The Holo Rare Xertneas is a basic type card that has a total of 120 HP. The card is pretty decent in battle as it can deal 100 damage with 1 psychic and 2 basic energy.

Its ability allows players to search their deck for three basic energy cards of different types and attach them to a Pokemon.

The rare holo Xerneas is one good-looking card; it has XerneaS in the front and center with its multicolor antlers. The background complements Xerneas’s colors very well, giving us this lovely illustration.

The artist Akira Egwa is known to create such masterpieces. For comparison, some of the best cards from Akira Egawa are the Zekrom full art from the Vmax climax expansion and the Chandelure Vmax from fusion strike!

The art style of Akira Egwa can be summed up in these three cards, the Pokemon is always in the front, almost all the time in action, and the backgrounds are vast and serene with top-notch color mixing.

The Holo rare Xerneas is valued at around $0.06 as of writing this blog post. But the value can fluctuate based on the cards in the market. But as it is a rare holo Xerneas, and there isn’t a lot of hype surrounding it, you can get it for much cheaper if you can find someone on eBay or craigslist.

There were a lot of great cards in the celebrations set. Hence most of the hype for the set went towards them. So if you’re looking to complete the collection, you can buy the Holo rare for cheap right now but don’t buy it expecting to get a profit in return any time soon.

Recommended – The art of Pokemon: Reshiram from Pokemon Celebrations!