The art of Pokemon: Reshiram from Pokemon Celebrations!

The Reshiram Basic Holofoil is a part of the 25th-anniversary Celebrations Set!

The Pokemon TCG has seen a lot of hype this year thanks to the 25th-anniversary announcement that was made. The Pokemon franchise will add two remakes of the Sinnoh region games and also a brand new game to its ever-increasing portfolio of games, along with the game a brand new limited edition Celebrations Collection set was also released.

The Reshiram Holofoil basic is a part of this set and is an important part of any 25th-anniversary collection. So if you’re someone who is thinking of getting their hands on this card, it will be good to know what the card represents, what the card is about, and most importantly, will it hold its value in the future! 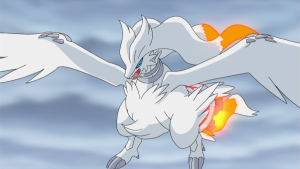 Reshiram is a legendary Pokemon from the Unnova region, it was on the cover of Pokemon Black when it was released. As you can see it is a dragon-type pokemon with a Fire-type dual typing. It can fuse with Kyurem to create brand new Pokemon known as the white Kyurem.

As it is a big white dragon, the local people think it is noble, even going as far as to worship it. Reshiram is known to help people who are trying to build a world of Truth. That being said, it is still a Pokemon and can breathe fire when someone messes with it.

The Reshiram holofoil basic card isn’t the only basic Reshiram card in the set. The other one is not a full art card but is worth having. Along with this basic card, the Reshiram card also has a counterpart, the Zekrom card.

The artwork on the Zekrom card is very similar to the Rehsiram card and, both are made in an almost 3d style.

The Zekrom and Reshiram cards were both created by the same illustrator that’s why they have identical art styles. The creator goes by the know of 5ban graphics and they seem to be an integral part of the TCG in the modern sets. The illustrator has some really great artwork, some of it shown above.

The illustrator mostly makes 3d style illustrations for the TCG. This adds an extra level of depth to their cards as most of the other artworks are strictly 2d. The illustrator also adds a light-colored border to some of the Pokemon which is clearly visible, this sets it apart from the other illustrators who also do 3d style in Pokemon.

The Reshiram basic holofoil is not the most coveted card from the collections set but it still is a card that has a high value for a basic card. As of writing this blog post, the card is valued at around $7. The price may fluctuate in the future depending upon the supply in the market, so you can check the most relevant price on TCGplayer.com or eBay.

The price of this ard may hold its value if not a lot of these cards come into circulation, If you’re a collector and want to have one, this might not be the best time to buy it as the site is relatively very new. Waiting for a couple of months might be the best idea. As for the future value, it will depend completely upon if the TCG does a reprint of the card or not.

Recommended – The art of Pokemon: Everything you need to know about Basic Reshiram from Pokemon Celebrations!