The Art of Pokemon: Holo rare Kyogre from Pokemon Celebrations

The Holo Rare Kyogre is a part of the 25th-anniversary Celebrations Set!

2021 has been one wild ride for the entire world as we finally started to get away from the pandemic. The ride was even crazier for the Poke fans because of the 25th-anniversary celebrations. Many new games were announced and also a special Celebrations TCG set too.

The set has a lot of hype surrounding it and has a lot of excellent chase cards that every collector would be eyeing on. One such card is the basic Kyogre. Though it is a basic card, it is still an integral part of the Celebrations set if you plan to collect all the cards.

In this article, we’ll deep dive into what the cards represent, the purpose of the cards, the illustrator’s motive behind the artwork, and lastly, the price and the future value of the card! 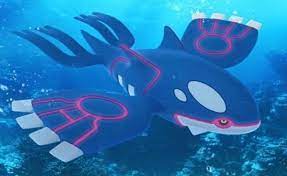 Kyogre was first introduced in the Pokemon universe through the third generation games that took place in the Hoenn region. It has God-level status amongst the locals of Hoenn. It has spread the oceans across the world while doing so, it also came into conflict with Groudon a couple of times.

Kyogre and Groudon often fought real hard; to stop this, Rayquaza had to come in and intervene every time. Kyogre also can revert to its primal form, which is even scarier and more potent than its standard form.

The card has not only has Kyogre in

all its glory but also Shelly and Matt swimming beside it. Kyogre is known to be a gentle giant to many who have come in contact with it. It has survived all this time by hiding in trenches under the ocean.

The Basic Kyogre card features the move surf, which is a pretty decent movie. The Pokedex entry on the card comes from Pokemon Y!

Ryuta Fuse has illustrated the card. As we can see, the card also features two trainers in it, adding to the card’s details. The theme of having a trainer besides the Pokemon can be seen throughout many of Ryuta’s cards. They are also responsible for a lot of trainer cards as well which are really popular nowadays.

Other notable cards from Ryuta fuse is the Charizard basic from Vivid Voltage and Rayquaza V from evolving skies. The Rayquaza V is a glorious card as you can see and probably the best Rayquaza illustrations of all time. You can see the scale of the Pokemon when a human stands besides them.

Hence Ryuta’s cards do a great job of showing the massive sizes of Pokemon.

As of now, the Basic Kyogre cards is getting sold for less than a $1, $0.15 to be precise. But this doesn’t mean that the value can’t increase in the future. As the card has very unique artwork, the collectors will surely want to keep their cards to themselves, making the supply low.

The scarcity will drive the price up, so be on a look out for this card and get one of you can. If you liked this breakdown of the TCG card, you can also read similar posts here – The art of Pokemon: Everything you need to know about the Ho-oh from Pokemon Celebrations!