The art of Pokemon: Palkia from Pokemon Celebrations!

The Basic Palkia is a part of the 25th-anniversary Celebrations Set!

The Celebrations collections have added a ton of new and exciting cards to the TCG. And when sets like these drop, the collectors always try to get their hands on every possible card in the set. This is the 25th-anniversary celebrations; who knows when something like this might happen again?

Before buying into these new sets, it is good to know what the cards are about. Often collectors will grab a card at high prices because of the hype surrounding it, but hype doesn’t last long. Eventually, your card’s value might drop if it isn’t a sound card.

In this article, we will be covering the famous Basic Palkia card from the celebrations set so that you can be well informed when buying it! 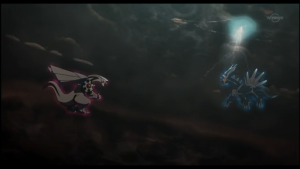 Palkia is one of the Pokemon form the creation Trio, which has Dialga and Arceus in it. Arceus is the God Pokemon, and Dialga and Palkia are like rivals. Dialga is responsible for time flow; hence, Dialga holds power to distort time, and Palkia can warp space.

Not only that, Palkia is so strong that it can actually create entirely new dimensions out of thin hair. It might as well be the second strongest Pokemon of all time, only behind the God, Arceus himself!

The Pokedex entry on this Basic Palkia card from the celebrations set comes from the main series game, Pokemon Y. Also, the attack, Overdrive Smash, was first debuted in the BW Black Star Promo Genesect card!

The card is very similar to the Dialga card from the set. They both seem to be standing next to each other, facing in opposite directions!

To know what the card means, you need to understand the art style of the illustrator first. The card was illustrated by the excellent and talented 5ban graphics, which also has many great cards under their portfolio of TCG cards. The Palkia card seems to be standing in space which is most likely its home; the card also appears to be connected with another card, the Dialga basic, which also is one of 5ban’s creations.

The illustrator is known to create cards where a lot is going on regarding the surrounding of the illustrations. Most of the time, Pokemon are drawn as 3d models; this makes the 5ban graphics cards stand out in the TCG!

As of writing this blog, the price sellers expect on eBay is $0.08. This price can fluctuate even more as more sets are opened. After reading the blog, if you think the card is worth it, surely go for it, because in the end, if you like the card, you should buy it. Most of the time, people accept cards that they don’t want just to flip out for a better price.

But if you aren’t able to resell it, then you’re stuck with a card you don’t like, so always buy stuff that you personally think looks good in your collections!

Suppose you liked this breakdown of the TCG card. In that case, you could also read similar posts here – The art of Pokemon: Everything you need to know about the Ho-oh from Pokemon Celebrations!