The art of Pokemon: Holo Rare Groudon from Pokemon Celebrations!

The Holo Rare Groudon is a part of the Pokemon 25th anniversary Celebrations Set!

The Pokemon Company celebrated its 25th anniversary in the most unimaginable way by kicking off the celebrations in space! This was followed by a ton of exciting announcements about games, especially the new one, Legends: Arceus!

But the 25th anniversary brought us more than games; the TCG community got a special gift, a new set for the 25th anniversary. The collection contains a ton of great chase cards and many reprints of classic cards from the past, so if you missed any of the old cards, take a look at the classic subset inside the celebration set you might find it!

But the cards are more than playing material; many collect them and are passionate about the hobby. On this site, we get into the nitty-gritty of every TCG card and its illustrations for such hobbiests.

By reading the title, you already know what the article is about, so without wasting any more time, let’s get into it! 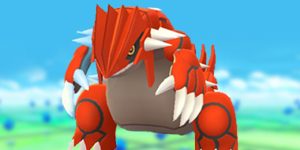 As we all know, Groudon is a part of a trio from Hoenn, which includes Groudon’s polar opposite, Kyogre, and the king of the skies, Rayquaza. Groudon and Kyogre are known to battle often, to assert dominance; in such times, Rayquza comes down to the earth to end the feud!

Groudon was a box art legendary for the 3rd generation games along with Kyogre. Both these Pokemon also got an even deadlier Primal form in the Ruby and Sapphire remakes.

The Holo Rare Groudon isn’t alone in the set, its nemesis, the Holo Rare Kyogre, is also seen in the set, and both these cards share the same illustrator, Ryuta Fuse. Also, this isn’t the only Groudon card in the set; there is yet another in the subset of the classic collection, which is being sold for $0.2.

Apart from Groudon, the Holo Rare Groudon also has the admins Courtney and Tabitha on the card; it seems like they are the ones who awoke the beast in the card. If you put the Groudon and Kyogre cards side by side, it looks like they are about to fight!

The illustration is probably one of the most critical factors for any collector in the TCG community. The illustration on the Holo Rare Groudon is top-notch. The artist behind it, Ryuta Fuse, has been creating many great cards recently, like the Rayquaza V from Evolving Skies, and the most recent one being Elesa’s Sparkle Full Art from Fusion Strike.

The artist has created a lot of trainer cards in the past, and also cards that have a trainer along with the Pokemon on them.

The value of any TCG card depends upon some essential factors, like rarity, illustration, and the most important ones being supply and demand. The markets are flooded with Holo Rare Groudon’s, and you can get one for as cheap as 0.07.

If you like the card, then, by all means, go for it and add it to your collection; the future value shouldn’t dictate your choices of buying a card if you’re really interested in the TCG.