The Ultra Rare Zacian V is a part of the 25th-anniversary Celebrations set!

The 25th anniversary of Pokemon brought a lot of exciting stuff for the community. The Celebrations set is just one of them. We also got a Diamond and Pearl remake along with a totally new game, Pokemon Legends: Arceus, which has the fans going crazy as it adds a lot of new mechanics to the base Pokemon game.

The Pokemon company knows how to entice its fans, and the Celebrations set is a testament to that fact. It contained a lot of great chase cards and a lot of reprints of older cards which are considered classics by many Poke fans. Charizard also got a reprint, and metal cards were an excellent addition too.

The Ultra Rare Zacian V is one such card in the set. Today in this blog post, we’ll be getting into the nitty-gritty of the card, its lore, its illustrator’s motives, the value, and much more. So without further ado, let’s get into it! 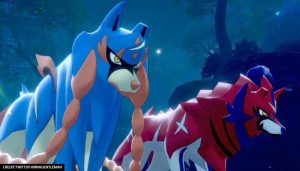 Zacian, as most of you will probably know, is the box art legendary for the latest Pokemon Sword and Shield games, along with Zamazenta. Zacian is a fairy type and has two different forms; the one you see on the card is the Crowned Sword form. Zacian also has a base form, the Hero of many battles form, which doesn’t look as formidable as the Crowned sword form.

Zacian, as you can see, is a wolf Pokemon; the Pokedex categorizes it as a warrior Pokemon as it is known to be very loyal and fierce in battles. The sword in its mouth pretty much sums up its warrior image!

If the Pokedex entries are to go by, then Zacian might be Zamazenta’s older sister or even rival; the information is very scarce and ambiguous.

Zacian and Zamazenta are the box art legendaries for the Sword and Shield games. Both have TCG cards in the Celebrations set, illustrated by the same artist, Mitsuhiro Arita. The Zacian in this card is in its Crowned Sword form.

If you put the Zamazenta V and the Zacian V together, you’ll see that these cards are a part of a joint illustration.

The illustration of any TCG card is the main attraction of the card. The better the illustration is, the better the card does in terms of value. The artwork on this Ultra Rare Zacian V has been done by the legendary  Mitsuhiro Arita. Who is known for creating the most expensive Pokemon card of all time, the Charizard Base Set!

Ad not only that but the base set Pikachu has also been created by Mitsuhiro Arita. This just goes to show the talent the artists have, as they’ve been able to stay in the TCG for decades at this point and still are churning out great art pieces.