The Ultra Rare Zamazenta V is a part of the 25th-anniversary Celebrations set!

The Celebrations set has been the talk of the town for a while now, especially the elite trainer boxes which were getting sold out even before people got a chance to click the order button. This level of excitement for this new collection of cards is due to the nature of the Celebrations booster packs and the distribution of cards in it.

The set contains a lot of great chase cards, and most importantly, the reprints of older classic cards, like the Base Set Charizard, are also seen in this new set. Metal cards are also a thing, and they look just phenomenal, to say the least.

One such card in Celebrations is the Ultra Rare Zamazenta V, which has a lot of hype surrounding it; many fans want to get their hands on these coveted cards. But before you do, go through this blog post which will be discussing the Lore, the Illustrations, the trivia, and the value of the card in detail, so that you make a well-calcualted purchase! 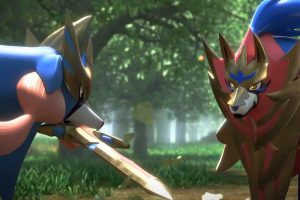 Zamazenta along with Zacian are box art legendaries for the Sword and Shield games. Zamazeta is categorized as a warrior Pokemon, and its battle scars are a testament to that. Zamazenta, in its base form or the hero of many battles, is a Fighting-type exclusively. In the Crowned Shield form it becomes a fighting/steel type Pokemon and looks more formidable than before.

Some say Zacian is Zamazenta’s older sister. In contrast, some say that they are rivals, the true nature of their relation isn’t very clear. (This information came from the Pokedex)

Both the Ultra Rare Zamazenta V and Ultra Rare Zacian V are a part of Celebrations. Both have been illustrated by the same artist who goes by the name, Mitsuhiro Arita. If you keep both these cards side by side, you’ll realize that these cards are, infact, part of the same illustration, just like the Ho-oh and Lugia from this set are.

You already know that the artist responsible for the Ultra Rare Zamazenta V is Mitsuhiro Arita. But if you’re a Poke fan, this name should ring some alarms in your head as this is the same artist who has created the legendary Base Set Charizard, the most expensive Pokemon TCG card of all time.

The artist has also created the Pikachu base set, a very coveted card in the Pokemon TCG community.

As for the value of the Ultra Rare Zamazenta V; it is being sold for less than a dollar on multiple websites. This price also depends upon the card’s condition; you can get up to $1 if the card is in Mint condition.

The card has excellent artwork on it, it is part of a joint illustration with the Zacian V, and it has been created by a legend in the Pokemon TCG. The card would surely increase the stature of any TCG collector’s colection.