The art of Pokemon: Holo Rare Dialga from Pokemon Celebrations!

The Holo Rare Dialga is a part of the Pokemon 25th anniversary Celebrations Set!

The 25th-anniversary Celebrations Set was released a while ago, and since then, the hype for the rare cards in the set has skyrocketed. The set was constantly sold out on every portal! Many players were left wanting more from the set but sadly weren’t able to get one.

One such card from the set is the Holo Rare Dialga, which has lately seen a lot of interest from collectors. This is very rare to see as the Celebrations set has even better cards in store for us, like the base set reprints and the metal cards.

The Holo Rare Dialga is unique. It will forever be immortalized as the Dialga card for the 25th anniversary of this fantastic franchise. So let’s dive deeper into the nitty-gritty of the card and its illustration so that we’re well informed about it going forward! 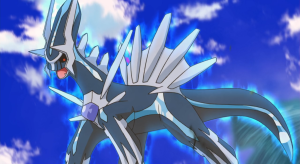 Dialga is an important Pokemon in the Pokemon universe, as it represents time in it. Along with Palkia and Giratina, Dialga is a part of the creation trio from Sinnoh. Dialga also is a box art legendary for Pokemon Diamond and Brilliant Diamond games.

Dialga is literally a God, as he is responsible for the flow of time; he can actually stop it, reverse it, or even go into the future without any hassle. If its heart stops beating, so will ours, as time will stop flowing!

In the cards above, you can clearly see that the backgrounds in both cards are very similar to each other; in fact, they both seem to be standing in the same place.

The illustration of any card is the main talking point, and if the illustration is on point, so will be the card’s price. And, the Holo Rare Dialga, has an excellent design. Its association with the Holo Rare Palkia only makes it more collectible as a set of two cards.

The artist behind this masterpiece is 5ban graphics, who is also responsible for the Holo Rare Palkia. This sets 5ban’s cards apart from the rest in the TCG!

The artist has also created another dual set of cards like the Urshifu V single and rapid strike!

Though the card is worth having in any collection, the price isn’t reflecting that as it is being sold for less than a dollar, $.10 to be precise on sites like TCGplayer.com and eBay.

If you’re an avid collector, having both these cards, the Holo Rare Dialga and Palkia, will only improve your collection. And as the cards are for the 25th anniversary of Pokemon, they will always remain classic. They will always be in demand in a few years!

Recommended – The art of Pokemon: Palkia from Pokemon Celebrations!