The art of Pokemon: Holo Rare Cosmoem from Pokemon Celebrations!

The Holo Rare Cosmoem is a part of the 25th-anniversary celebrations set!

The Pokemon TCG has been on fire this year; we’ve been getting a lot of unique chase cards, especially from the 25th-anniversary set, which also included a lot of reprints of older chase cards. Along with these reprints, we also got to see some new cards in the set.

The Holo Rare Cosmoem is one such card from the Celebrations set, and it has been in high demand ever since the set dropped. The card is essential to any collector who thinks of completing the collection.

In this article, we’ll be going into the nitty-gritty of the card, the illustration, the future value, and more so that you can make a calculated offer when buying this card. 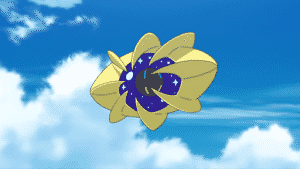 The Holo rare Cosmoem evolves from cosmog, a gaseous Pokemon that grows bigger by collecting dust from the atmosphere. Cosmoem is a really important Pokemon in the games of the 7th generation, Pokemon sun and moon, as it evolves into the box art legendaries, Lunala and Solgaleo.

Cosmoem is inside the shell, which is oval; it can’t eat when inside it. The shell is known to be harder than any material available. It grows by absorbing sunlight and dust. The inside of the oval looks pretty spacious, so fear not the Cosmoem is just fine!

The Holo Rare Cosmoem, as we know, is a part of Celebrations. There also is a Cosmog card in the same set, which also features Lilie on it. Both cards have Lilie on them; the cosmog card shows us how Lilie tasks care of Cosmog when it is small and continues to take care of it even after it evolves.

The beautiful illustration on the card is done by KirisAki which is a well-known Pokemon TCG artist. They have a lot of great Pokemon cards in their portfolio, including the Holo Rare Cosmog.

As the Lunala, Solgaleo, Cosmog, and Cosmoem cards have been created by KirisAki themselves, all these ecards show a connection. In the cosmog and cosmoem cards, we see lilie taking care of the Pokemon. But in the Lunala and Solgaleo cards, we can see Lilie standing alone. At the same time, the Pokemon is front and center, showing their transition into an independent and powerful Pokemon!

KirisAki, most of the time, adds a human besides the Pokemon; this is a minor detail. Still, it shows us the actual scale of Pokemn, which goes noticed when the Pokemon is alone. Even their art style is pretty unique, as you can see in the Skyla card; this makes their cards stand out in the TCG!

Writing this blog post, the Holo Rare Cosmoem is being sold for $0.1 on multiple websites. This price may fluctuate depending upon the supply of the card and also its condition. The future value of this card might be more than what it is now, but it is still early to speculate about it.

But if you’re looking to complete your collection, you should buy the card, as it is was being sold for higher prices at the time of the release.