The art of Pokemon: Holo Rare Cosmog from Pokemon Celebrations!

The Holo Rare Cosmog can be found in the 25th anniversary Pokemon Celebration’s set.

The 25th-anniversary Celebrations set had given us a ton of great cards and also reprints of older cards that were really popular when they were released. One such card is the holo rare Cosmog, an integral part of the celebrations set for any collector if they want to complete the collection.

There is a lot of hype surrounding the celebrations set, but before you go ahead and invest your money in the holo rare Cosmog, let’s take a brief look at what the card represents, what was the illustrators motive behind the artwork, as this will, in turn, affect it’s the price going forward as the hype dies out. 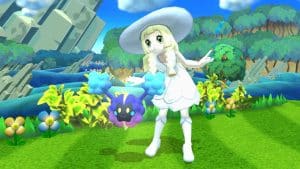 Cosmog is made up of gas but somehow manages to stay together and not blend in with the environment. It can gather dust from its surroundings to grow bigger. Cosmog can also open Ultra wormholes, but it makes it weak. It evolves into Cosmoem.

The Holo Rare Comsog isn’t the best TCG card out there, as the only thing it can do is avoid damage if you manage to flip ahead. That being said, some players might be able to include it in its deck suiccesfully.

In the celebrations set, Cosmoem also has a card that features Lilie, just like the cosmog card.

KirisAki is the artist responsible for this beautiful Cosmog card. KirisAki is a well-known Pokemon illustrator, and they have some great cards under their belt; some of them are shown above. As you can KirisAki is trying to tell a story through the Cosmog card.

We can see Lilie taking care of the timid Cosmog as it cries; the Cosmoen also shows Lilie sleeping beside it, taking care of it. In the Solgaleo and Lunala cards, Lilie is seen once again, looking into the abyss. Most of the illustrations from KirisAki have a trainer or humans in them; this adds a sense of scale to the Pokemon’s size.

The art style KirisAki uses is also very distinct; as you can see in the Skyla card above, most of their cards follow this same art style.

The story the illustrator tells through its cards is just incredible; you can visit our site to find out more about such excellent Pokemon TCG illustrations.

As of writing this blog post, this Holo rare cosmog is being sold for $0.10-0.20, which is a lot if you compare it to other holo rares from the same set. The card is worth having in the collection and its evolutions, Cosmoen, Solgaleo, and Lunala.