The Arceus V Alternate Full Art is a part of Pokemon Brilliant Stars!

Brilliant Stars also added the brand new card mechanic, V Star. This will change the TCG in many ways and give you, the TCG collectors out there, something to chase.

Though there are a lot of chase cards in the expansion, we’ve decided to write a blog post about the Arceus V Alternate Full Art. The card has been doing the rounds on many TCG forums, the card’s value is soaring, and today, we would like to shed some light on its features.

So without further ado, let’s get into it. 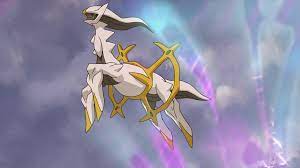 Arceus as we all know is the benevolent god of all Pokemon. He is the source from which the Pokemon came into being. Arceus is an important figure in the Pokemon; in fact, it is so important that Gamefreak created a whole new game after its name, Pokemon Legends: Arceus!

It is the creator of the Sinnoh region and possibly the entire Pokemon universe with help from the lake guardians and the creation trio.

Arceus is a Pokemon that has appeared in the TCG in all types, except for the Dragon and fairy type. Also, unlike other cards in the game, you can have as many Arceus cards in the deck as you like.

Arceus first debuted in the TCG in the Arceus Expansion Set.

The illustration on any card can make or break its value; hence it is imperative to create a card that’ll be appreciated by the community. The Arceus V Alternate Full Art is illustrated by the talented TCG artist Kawayoo. The artist has a very distinct art style when creating TCG cards.

This art style becomes apparent when you look at some of the other cards this artist has drawn, like the ones shown above.

As the Arceus V Alternate Full Art has been out for s short time now, the value is high. At the moment, the card’s price is soaring; it is touching $80 on some marketplaces. Though the card might seem expensive at the moment, as it is an alternate art card, it might hold its value in the long term.