The Marnie’s Pride Full Art is a part of Pokemon Brilliant Stars!

Pokemon Brilliant stars is setting the stage for all the fantastic Pokemon events that will happen this year. Being the first expansion for the year 2022, it had to go big, and it went big! It introduced a whole new card type, Pokemon V Star!

The expansion is also home to many full art trainer cards from the much anticipated V Max climax expansion released in Japan. Because of this, the expansion comes with a ton of great chase cards, one of which is Marnie’s Pride Full Art.

Marnie is one of the most popular characters from gen 8, and her card follows the same path. IN this blog post, we will talk about the card’s origins, the illustration, some fun trivia, and most importantly, what the card’s value will be in the future! 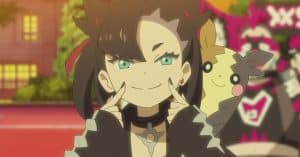 Marnie is a beloved character from Pokemon Sword and Shield and plays a rival role. She eventually replaces her brother Piers as the gym leader of her hometown gym, Spikemuth.

It is pretty evident by her alternative clothing what type of Pokemon she loves; Dark-type Pokemon are her specialty in the games, just like her brother’s. She and her brother were the first gym leaders to specialize in Dark-type Pokemon. Also, the number 960 on Marnie’s uniform men’s hardship.

The illustration plays a vital role in any card’s market value, especially if the card has an excellent illustration, just like Marnie’s Pride Full Art. The illustration on the card makes it enticing to collectors of the TCG, driving the value higher.

The artist behind this beautiful card is the amazingly talented Souichirou Gunjima, who has been working in the TCG for years at this point. The art style sticks very close to the art style of the Pokemon anime; the characters look straight out of a show.

Their art style is praised by many in the TCG community, and some recent examples of their work are the Pikachu V Max from V Max climax and the Eevee form Brilliant stars. The Pikachu V Max is one of the most coveted cards from last year and still hasn’t seen an English release. Still, we all know it will have an astronomical valuation when it is released eventually!

The price of any card depends upon several factors, like condition, rarity, availability in the market, etc. At the moment, Marnie’s Pride Full Art is being sold for anywhere between $30-40. This price is an average of the prices that we found on multiple sites where TCG cards are often resold.

The price might very well go down once more card’s come into the market. But over the long run, the price might stabilize, and if there’s an interest in Marnie cards again, it might even increase.