The Charizard V Full Art is a part of Pokemon Brilliant Stars!

Pokemon Brilliant Stars was released back in February, and since then, it has been a popular expansion to collect. Fans have forgotten about previous expansions like Fusion Strikes and Battle Styles, which are now selling for really cheap. The reason for this is Brilliant Stars’ excellent collection of cards.

The expansion has introduced the brand new V Star cards, which the fans are really after. Apart from that, the expansion also features a lot of great cards, like this Charizard V Full Art which has been one of the most expensive cards ever since the release of the expansion.

You’ve reached the right destination if you’re thinking of buying this card. This article will shed some light on the card’s value, which is tied in with its design, illustration, supply in the market, and many more factors. By the end of this article, you’ll have better knowledge about the card, and then you can make the investment if you want! 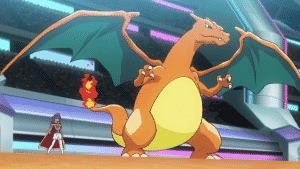 Charizard is one of the original three starters for Pokemon. It is the fire type that everyone goes to compare to every other fire type starter. Charizard has been one of the most iconic Pokemon in the fandom. The most expensive cards are usually Charizard cards.

Charizard is one of the fiercest Pokemon in the game. It doesn’t like to battle other Pokemon unless it thinks they are a worthy competitor. They fly over the forests looking for the formidable foe to battle!

The Charizard form base set is still one of the most popular cards globally, not just in Pokemon. The Pokemon made its debut with the base set and has been a part of almost every set since then.

The brilliant stars expansion features 5 great Charizard cards; you would be lucky to get anyone one of these!

The illustration of any card can make or break its price as most people who collect TCG cards are only collecting them; they’re not interested in playing with them. So the illustration means it matters a lot to the collector, and the Charizard V Full Art has a great illustration. Thanks to the artist who goes by the alias N-Design Inc on the card.

The artists have done some great work recently, like this fantastic Garchomp V form battle region. Their art style is very much distinct from other artists in the TCG.

The card’s value depends upon the condition and availability in the market. As of now, the card is being sold anywhere between $40-50 on multiple sites. The price may drop further as more and more packs get opened. So if you want to get it to complete your collection, by all means, get it, but don’t go in thinking about it as an investment. There are a lot of cards better than this one in the expansion that might appreciate in value.