The art of Pokemon: Arceus V Star from Brilliant Stars!

The Arceus V Star is a part of Pokemon Brilliant Stars which will be released on the second month of 2022, i.e., February 22nd.

From the very beginning, Brilliant Stars has been focusing on the legendary God of all Pokemon, Arceus. Not only that, but Arceus is also one of the few Pokemon in this expansion to get the brand new V Star mechanic.

BRILLIANT STARS is probably based on the brand new Pokemon game Brilliant Diamond and Shinning Pearl. Apart from that, there also is a brand new game being developed, and it has Arceus as its box mascot, so it only made sense to put more emphasis on Arceus in Brilliant Stars.

And just like the Pokemon company, we also are putting some emphasis on the Arceus cards in the pack. The Arceus V Star, to be precise. We will be discussing the origins of the cards, the illustration, the meaning behind the card, and lastly, the value that it will get on release! 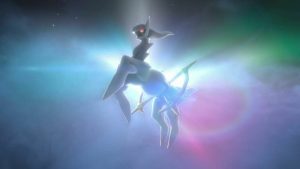 Arceus was originally from the Sinnoh region. It is also the trio master of the lake guardian and the creation trio. It is believed that, along with Sinnoh and Ransei, Arceus also created the entire Pokemon universe and therefore is the defacto GOD of the Pokemon universe.

It can change into any type if the necessary item is given in the game. It is so important to the Pokemon lore that they’ve created a brand new Pokemon game dedicated to it, Pokemon Legends: Arceus.

Arceus has appeared in the TCG in every Pokemon type, the only type that we haven’t seen an Arceus in are the Fairy and Dragon types. In a TCG standard deck, you can have as many Arceus cards as you want. The Pokemon made its TCG debut in the Arceus expansion set!

The latest Pokemon game to be released, Pokemon brilliant Diamond and Shinning Pearl, and the one that is yet to be removed, i.e., Pokemon Legends: Arceus. Both have Arceus in them.

Unlike other Arceus cards that have been released in this Sword and Shield era, the Arceus V Star is going to be very different. First and foremost, it will be introducing a brand new mechanic to the TCG, which is V Star. Hence the card had to be great, and 5ban Graphics, who illustrated this card, indeed met the standards the community was hoping for.

The Arceus in the card is similar to the ones we saw in the games, and 5ban graphics are known for such illustrations. For example, some of the other images they’ve been credited for are the Charizard V Star and Shaymin V Star!

As the card is not out yet, it is tough to predict the price. But if we had to speculate, then the card’s initial value might easily cross $100. As it is a new Mechanic, the card is also very aesthetically pleasing. Which is enough to earn a spot in many people’s collections!